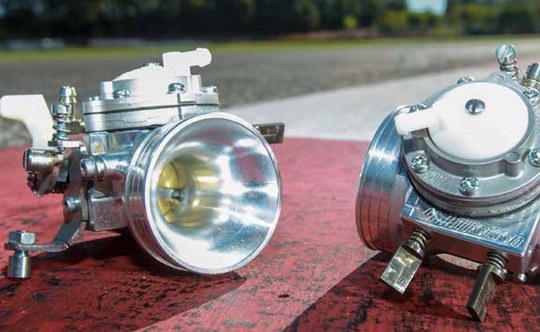 Tillotson has been working on the new carburettors for over three years and the result is sure to excite the Rotax racing world. «Our first goal was to increase overall performance of the Rotax engine, but we also wanted to create a carburettor that is much easier to configure and adjust, compared to the existing carburettor,» noted Andrew Fallon, the Tillotson engineer and a former Irish champion in KF and Rotax, personally supervised the testing and product development.

All that effort shows ... Vroom magazine in their independent tests of the HM-2A recorded lap times of more than 3/10ths of a second per lap faster and hailed the Tillotson carburettor as the first “proper racing carburettor” for Rotax engines.

who really wants something special, the HM-2A can be custom anodized in a variety of colour options. The HM-2A is already available (see Tillotson-racing.com for details), while the HX-10A will be released in spring 2014.

«These two new products will add a new dimension to Rotax racing and are sure to attract pilots, distributors and national federations. This is the perfect carburettor for clubs and national series looking for a faster carburettor with great ease of use,» commented Charles Demirjian, President of Tillotson.