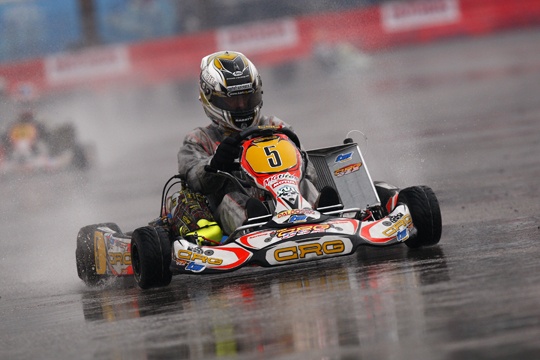 Press Release by: CRG
In the picture, Davide Forè racing in Las Vegas's KZ2 where he ended third (Ph Cody Schindel CanadianKartingNews.com)
Davide Forè obtained the podium in Las Vegas' KZ2 with CRG USA. Soon after,  Jordon Lennox-Lamb and Davide Forè secured the top two steps of the podium in Brazil at the KZ2 race of Santa Catarina with CRG.

Davide Forè had an intense end of the season in the double exit to Las Vegas and Brazil. In South America he has been joined by Jordon Lennox-Lamb for the KZ2 race concurrent with the 500 Miles of Santa Catarina. Forè obtained a podium in Las Vegas' KZ2 with CRG USA, while CRG Brazil scored a one-two in KZ2 with Lennox leading Forè in Brazil. This double exit confirmed the competitiveness of the chassis of the Italian outfit as happened for the whole season 2013.

FORE’ THIRD IN LAS VEGAS. The exit to USA in occasion of the 17th edition of the SKUSA Supernationals – race able to score once again an incredible success with more than 500 entered drivers in 11 categories competing at the circuit prepared on the parking lot of the Hotel Rio of Las Vegas – has had a protagonist in Davide Forè who has been racing on a CRG chassis pushed by a TM engine unit prepared by Bruno Daldosso.

Forè secured the pole position and then clinched a good victory under the rain and two second places in the heats. In the Final, Davide Forè got away from the outside of the front row and run a very nice battle in the leading pack ending in third place at the flag, behind the winner Abbasse and in  Lammers' slipstream.

Team Gamoto Racing came also to the fore in Las Vegas as Muizzuddin Musyaffa on CREG/Hero obtained the second place in the category Tag Cadet at the end of a recover from the 29th position finished at only 63 thousands from the winner Leonardo Marseglia.

LENNOX LEADING FORE’ IN BRAZIL. A week afterwards, Davide Forè and Jordon Lennox-Lamb took part in the KZ2 race held at Santa Catarina, Brazil. That was a joint event with the karting 500 Miles Beto Carrero World where the team led by Rubens Barrichello won the endurance race.

Forè and Lennox got on track with team CRG Brazil for the KZ2 race. The victory of a very tight final went to Lennox as he managed to overhaul Prefinal winner Forè  at the last corner. This marked another good success for CRG's colors that occupied the top two steps of the podium. The third place went to Gaetano Di Mauro on Techspeed.