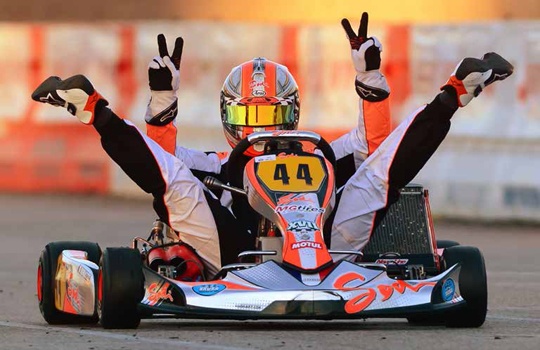 Press Release by: Sodi Kart
After a brilliant 2012 season that ended with the CIK-FIA World title, 2013 has been the year of all successes for Sodikart and its range of top-performing racing chassis: from Mini Kart to KZ, from sprint to endurance, from national to international, Sodi chassis have won everywhere. For several years now, manufacturing quality has been an absolute priority for Sodi and this strategy has proven highly successful. Anthony Abbasse’s recent triumph in Las Vegas Supernationals is just the icing on the cake...

Théo Nouet in Mini Kart, Adrien Renaudin in Cadet, Anthony Fotia in Nationale, Vincent Fraisse in X30 and Rotax Max, Olivier Paris in Rotax Max Master, Maxime Gravouille in DD2, Sarthe-RTKF in Endurance, and Anthony Abbasse in KZ2: all these drivers have something in common, since they won the most important competitions in 2013 behind the wheel of their Sodi chassis.

Sodikart’s determination to win in all the classes, under all possible conditions, has enabled this company to conquer an impressive number of victories! Sigma, Innova and Delta chassis, to which Sodi

has devoted special attention as far as manufacturing quality is concerned, have been again the stars of this sporting year. This long list of achievements is also the result of perfect cooperation with the several teams that decided to place their confidence in the French company.

At the start of the season, Vincent Fraisse won in Challenge Europa X30, and then the series of French Champion titles began: in Rotax Max as well as in X30 with Vincent Fraisse, in Rotax Max Master with Olivier Paris, in Nationale with Anthony Fotia, in Mini Kart with Théo Nouet and in Endurance with Sarthe-RTKF. Not to mention the onetwo victory at the 24 Hours of Le Mans Karting, in addition to the fifth victory in a row!

The US under Sodi’s Spell

Sodi’s results at the highest international level have been equally eloquent. After a third place in the European KZ1 Championship, Anthony Abbasse dominated the 17th edition of the prestigious Las Vegas Supernationals. This Sodi driver won the pole and maintained his leadership after the three qualifying heats, then controlled the final race from the beginning to the end. «It was an extremely trying race because the weather kept changing during the qualifying phase. But both in the rain and in dry weather, my Sigma chassis showed impressive effectiveness and was ultra competitive. After my victory in 2011 and the second place in 2012, it is great to win again in such a prestigious, hard-fought and popular competition», Anthony commented.

A week after providing high-quality services during the Rotax Grand Finals at New Orleans, where Sodi supplied all the chassis to Rotax Senior drivers, this new success is an excellent auspice for the forthcoming 2014 season.