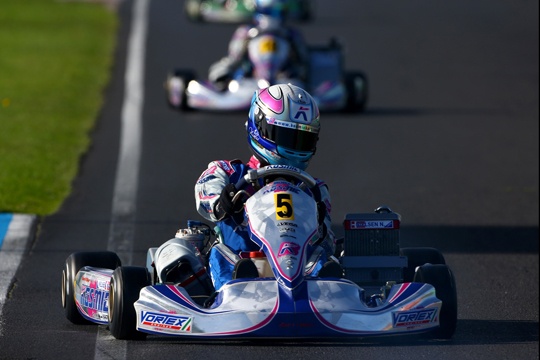 Press Release by: Kosmic Kart RT
The second and final round of he CIK-FIA World Championship for KF category, held in Bahrain, made us very disappointed and embittered.
CIK-FIA WORLD KF and KF-JUNIOR CHAMPIONSHIPS (Rd 2). BAHRAIN, 22-23.11.2013


After our qualities had been shown off with Nicklas Nielsen, in the World Championship’s final we had the chance to fight for the victory out due to Max Verstappen’s unfair play with regards to our driver Nielsen.

During the eighth lap of the final our driver had to withdraw from the competition without guilt, losing this way the chance to run for the world title in a regular competitive context. Nielsen was running in the third position, bearing down on the main championship’s rival Verstappen for two laps. In the eighth lap, in the short straight road before the final bend of the circuit, Nielsen performed a decisive overtaking on Verstappen. The last one, as soon as he saw his rival next to him, did not hesitate and clearly played unfairly, actually he intentionally changed his trajectory and strongly hit our driver, who ran out of the track causing irreparable damages to the chassis. Verstappen was then disqualified by the Race Director who stated: “The Driver no.1 caused a avoidable collission in 8th lap.….. he changed intentional the racing line in the direction of kart no. 5 and pushed the kart no. 5 out of the track”. Nevertheless it is a cold comfort.

In Bahrain, the hard job of our was humiliated, as in the second European Championship’s round happened already, when another driver behaved very approximately, unsportingly and negligently. In the European Championships’ round for KF held at the Circuit of Abruzzo, Nielsen, first driver in the ranking was unfairly hit by Lennox-Lamb, and in that case too the Race Director punished the rival with a penalty. As previously said, some unsporting behaviours humiliated our driver and team’s hard work, not allowing us to compete on equal terms with the other drivers in such a World Championship which should represent our sport’s best showcase.

At the end of this Championship the competitiveness of the Kosmic Kart-Vortex chassis marks the time, it is evident with Nielsen’s best lap as well as with the way the race was going on and with the podium gained by another driver of ours, Armand Convers. Just Convers’ result confirms how it is possible to gain a good result even starting from the back, appealing on his own skills only and running correctly.

We are in grief for these continuous unfair and incorrect events such as the ones occurred during the current season. So we wish that this kind of discouraging situations won’t happen again in the future since they humiliate the whole karting world.