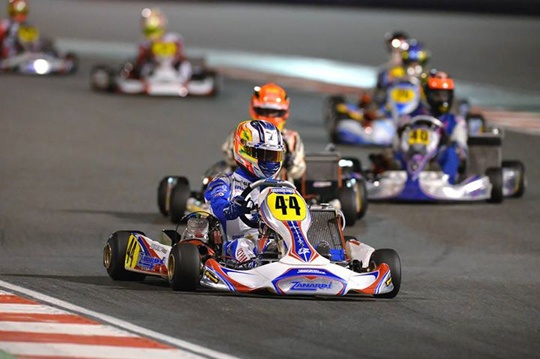 Press Release by: FIA Karting
On the superb Bahrain track the race for the world titles in KF and KF Junior gradually increased in intensity until a breathless final phase full of twists. In KF there was a surprise winner, the Briton Tom Joyner has won the world title that eluded him last year. In KF Junior, the Italian Alessio Lorandi is at the top of a classification which is not yet final.

Drivers and teams have praised the international karting circuit in Bahrain in the heart of a complex dedicated to motorsport, including the F1 track. Many can only dream of such a site in Europe, and the warm welcome from the Bahrainis is one of the characteristics of the countries in the Middle East that is not found elsewhere. In his own country, the President of the CIK-FIA, Sheikh Abdulla bin Isa Al Khalifa did the honours for the World Kart Championships along with the crown prince of the kingdom, His Highness Salman bin Hamad Al Khalifa.

Rarely for this country, rain flooded a portion of the track earlier in the week, but the effectiveness of the organising team prevented the running of the event from being disrupted. The competition was held in the sun during the day and clear at night, with very reasonable temperatures. It was a pleasant surprise that the entry was very convincing in quality but also in number: 95 drivers made the trip, 33 KF and 62 KF-Junior, demonstrating the attractiveness of the event despite its remoteness.
The competition gradually ramped up throughout the meeting to reach its maximum during the decisive finals for the two world titles, taking place at night. The excitement of the drivers had to be calmed by a few reprimands and penalties, especially over staying within the limits of the track. In both categories, the winners were not necessarily those who were most expected.

Dorian Boccolacci (Energy-TM-Vega) opened the scoring in KF with pole position and stayed in front in the qualifying heats despite Max Verstappen (CRG-TM-Vega) returning in second position, winning two races. The Prefinal already produced a great show and a few virile clashes, while Verstappen won against Tom Joyner (Zanardi-TM-Vega) and Felice Tiene (CRG-TM-Vega). The Dutch driver however, seemed to have less verve in the final, with Joyner getting the better of him on the sixth out of 22 laps. Nielsen also went on the offensive, but Verstappen tried a desperate manoeuvre to retain his place and the Dane went off the track while losing any chance of winning the title.
On the track, nothing hindered the triumphal march of Joyner who won by more than two seconds at the chequered flag ahead of Karol Basz (Tony Kart-Vortex-Vega) and Armand Convers (Kosmic-Vortex- Vega), who made a recovery of 14 places to reach the podium. In the Championship, it was very tight between Joyner and Ben Hanley (ART GP-TM-Vega), whose fourth place allowed him to total the same number of points as Joyner. Joyner nevertheless won the world title with his victory in Bahrain, while Verstappen, excluded from the race, finished third behind Hanley.

Victory for Norris in KF-Junior