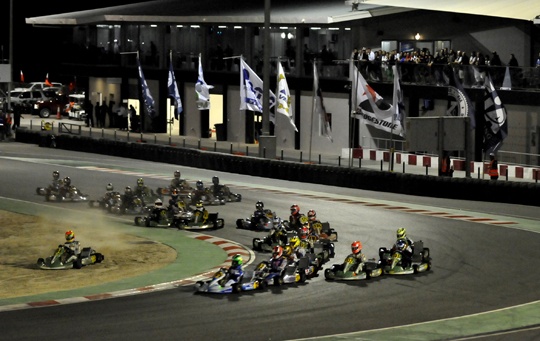 Press Release by: WSK
Boccolacci (F - Energy-TM KF) and Norris (GB – FA Kart-Vortex KFJ) are the pole sitters at the World CIK-FIA Championship KF - KFJ. Tomorrow the heats. On Saturday 23rd the Finals live in streaming on www.cikfiachampionship.com and www.cikfia.tv
The weather is fine again in Sakhir after the previous remarkably wet days in the Bahrain archipelago. The sun is shining and the 1,414 metres of the Bahrain International Karting Circuit are now dry and ready to host the race that, on Saturday 23rd November, will award the World CIK-FIA Championship for the KF and KF Junior categories. The dry weather was the perfect setting for the qualifying which took place today, before tomorrow's heats. The competition has just started but there are already the first interesting results: we can already make out the favourites drivers among the 95 scrutineered entrants taking part in the first qualifying session of late evening. Sheikh Abdulla bin Isa Al Khalifa, the CIK-FIA President, was present at this important moment of the season.

The race in KF is still uncertain after Boccolacci's pole.
Dorian Boccolacci (Energy-TM-Vega) put in a great performance under the artificial light of the night of Sakhir. He stopped the clock at 52”159 and grabbed the pole in KF.  However, Boccolacci's attempt to climb the standings seems rather hard: he is currently in 9th position after the 7 points he scored in Brandon (UK), where the first round of the championship was raced. Anyway, the current leader with 25 points, Max Verstappen (CRG-TM-Vega), seems to be in trouble. He only set the 9th time, 177 milliseconds behind the pole sitter. The Dutch driver has not found, so far, the ideal chassis-engine setup for his kart and, now, he has to close the gap. In the meantime, his main rival, the Danish Nicklas Nielsen (Kosmic-Vortex-Vega), is doing well and achieved the third time, 102 milliseconds behind Boccolacci. His fellow countryman's result is even more interesting: Andreas Hansen (Tony Kart-Vortex-Vega), in fact, placed only two milliseconds behind the leader and filled the second slot on the starting grid. He will start next to Boccolacci in the KF qualifying heats; in second row, next to Nielesen, the Italian Luca Corberi (Kosmic-Vortex-Vega), who set the fourth time.

Ahmed's pole reopens the games in KF Junior.
In KF Junior, too, it is an underdog who makes the race for the title more uncertain: in fact the pole sittter is the British Enaam Ahmed (FA Kart-Vortex-LeCont), fifth in the current standings with 11 points, thanks to his 53”556. The Italian Leonardo Pulcini (Tony Kart-Vortex-LeCont), the leader with 25 points, was much slower and he only managed to place 13th. On the other hand, his closest opponent, the Italian Alessio Lorandi (Tony Kart-Vortex-LeCont), did better and achieved the 6th position, 197 milliseconds behind the pole sitter. Alessio Lorandi's brother, Leonardo, was definitely much faster and placed second, just 78 milliseconds behind the leader. After the disappointing first round in Sarno (ITA), where he did not score any point, the English Lando Norris (FA Kart-Vortex-LeCont), one of the top drivers of the category, redeemed himself and placed third with a gap of 156 milliseconds. Behind him the Russian Nikita Mazepin (Tony Kart-Vortex-LeCont). He, too, has arrived in Sakhir with zero points. The results of qualifying make tomorrow's races absolutely uncertain: Norris has already started to succeed, winning one of the two heats in schedule today. Leonardo Lorandi won the other one, confirming that the race for the championship is still open and uncertain.

How to follow the World Championship in Bahrain. All the images of the round will be available live in streaming on  www.cikfia.tv and www.cikfiachampionship.com on Saturday 23rd. On Rai Sport 2, on Tuesday 26th, the delayed broadcast of the Finals and, on Friday 29th, the after-race special report from Sakhir.