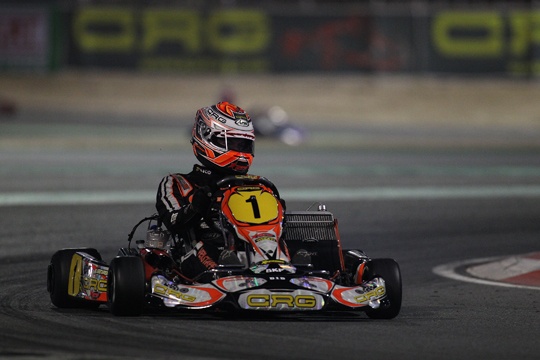 Press Release by: CRG
In the picture, Max Verstappen in Bahrein
The super-modern facility of Bahrain housed the night qualifying on Thursday and current classification leader Max Verstappen set the ninth quickest time, Felice Tiene followed him with the tenth. Jordon Lennox-Lamb slightly delayed. Troubled start for Marcu Dionisios in his first heat in KF Junior.

Sakhir (Bahrain). After two days spent with free practice, the second round of the KF&KF Junior Championships got to their heart in Bahrain with Thursday's qualifying held in the night. The sessions took regularly place despite the quite unusual and violent downpour that flooded several sectors of the track. The situation was sorted in record time though.

A F1 TRACK FOR KARTS. The circuit is located in the facility that also houses the Formula 1 track in a quite unique context for karting. The super-modern track is full of up and down hills and inherited several concepts from the bigger circuit, starting from run-off areas that are all very wide and covered with asphalt which allowed several drivers to get advantage of the extra space following un-ortodox trajectories. The impression is of high uncertainty for the final result that is everything but granted.

VERSTAPPEN RUNNING- UP. Thursday's qualifying did not have a particularly positive outcome for the classification    leader    of CRG Max Verstappen, who won the first round in England but had some setup problems here and obtained the ninth time after being under the spotlight in the previous days. The time set by Felice Tiene was virtually the same as the one clocked by the Dutch driver, as the Italian was just a thousand of a second shy of his team mate. Jordon Lennox-Lamb ended a little bit more to the back, at 0.385s from the pole position. The three CRG color bearers – all on a TM engine prepared by the Scottish “wizard” GFR – count on putting in a recover starting from the heats scheduled for Friday that will be crucial to secure a good starting position for the final stages of Saturday.

DIONISIOS IN KF JUNIOR. In KF Junior CRG's works team lined up Marcu Dionisios, on TM engine by Galiffa Racing. The young Romanian driver set the 23rd time in qualifying, but had to retire in the first heat of the day. An unlucky start that Dionisios will have to turn around.
The pole position of KF went to the French Dorian Boccolacci (Energy), who was 2 thousands quicker than Andreas Sebastian Hansen (Tony Kart), while the third time was set by Verstappen's main rival in the standings, Nicklas Nielsen (Kosmic). From what seen so far this KF race will have to be followed from lights to flag. In KF Junior the pole position was set by the British Enaam Ahmed (FA Kart).

All results are available on the websites www.cikfia.com and www.cikfiachampionship.com.