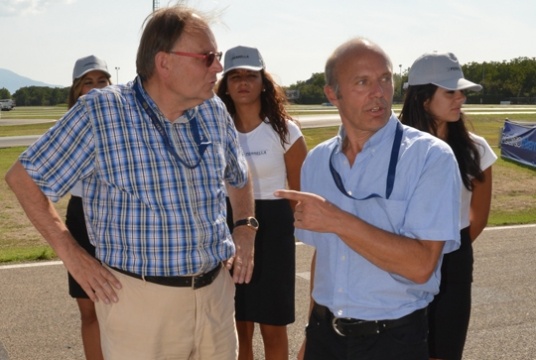 Author: Vroomkart International
The late release of the 2014 CIK international calendar was a clear sign that negotiations between the international federation and the Italian promoter/organizer were not as smooth as the official statements were trying to suggest.
Quite the opposite, as the latest official communication of the CIK hints, it turned out that the matter of cost control was the major point of discussion creating unrest in the CIK-WSK adventure. While the press release opening comment by the President of the CIK, Shaikh Abdulla Bin Isa Al Khalifa, is aimed at praising the work done by WSK Promotion in 2013 in the organization of CIK World and European Championships, the following sentence by the Vice President, Kees van de Grint is clearly a heavy blow disguised as an appeal of constructive criticism.

The CIK press release reads “WSK Promotion has undeniably made significant improvements to our events,” said Shaikh Abdulla Bin Isa Al Khalifa, President of the CIK-FIA. “The difference is visible when you arrive in a European Championship or World Championship paddock. The presentation of the circuits, the warm welcome and the service provided to competitors and those accompanying them have increased significantly.”

But the core of the communication leaves little doubt in its true purpose.
“However, we are aware that we can, and must, do better,” said the Vice-President of the CIK-FIA, Kees van de Grint. “Especially in the area of cost control.”

Discussions on improving the running of CIK-FIA Championships for the 2014 season began long ago in the sporting working group. The proposals made were accepted by the Commission and an agreement was finally reached with the promoter to the benefit of competitors.

Here are the main changes to the sporting and technical regulations:
- Reduced entry fee by about 20%;
- Removal of the deposit at registration (except for the Academy Trophy);
- Reduction of the duration of meetings: Installing the paddock on Wednesday, free practice from Thursday, timed qualifying on Friday afternoon;
- Reducing the number of tyres allowed from free practice to the final, four new sets for the KF, KZ and KZ2 categories, three new sets for KF Junior and two new sets for the Academy Trophy. All drivers may use a set of tyres to start free practice;
- Introduction of a Wild Card for drivers who wish to participate in a single event of a championship that has several events;
- Deadline extended to five weeks before the first race and at a higher entry fee rate when registering no later than one week after the deadline;
- Removal of one of the two prefinals if the number of entries is less than 75;
- Removal of the parc ferme tyres, tyres will be equipped with a barcode and controlled with the MiniRae Lite device.