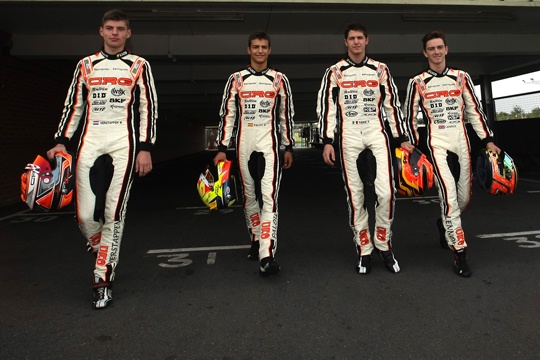 Press Release by: CRG Racing Team
In the picture, from left Max Verstappen, Alex Palou, Felice Tiene, Jordon Lennox-Lamb (Ph_Cunaphoto.it).
CRG is heading to Bahrain for the final round of the World Championship that will
take place next Saturday 23rd November. Max Verstappen is the current
championship leader and is well motivated to get an historic en-plain!
On track also Jordon Lennox-Lamb, Felice Tiene and Yuta Shiraishi
with the technical novelty of TM engine.
In KF Junior Marcu Dionisios to defend CRG colors.


All is set for CRG's charge to the last title of CIK-FIA available for season 2013. The modern
track of Sakhir in Bahrain is in fact about to house the KF and KF Junior World
Championships. CRG and its drivers will compete in this final race of the season with the
usual professionalism and an interesting technical novelty.


VERSTAPPEN LEADING THE STANDINGS. CRG will get to Bahrain with Max Verstappen as
championship leader after the round held at the PF International Circuit of Brandon, England,
where the Dutch champion dominated the scene on CRG chassis powered by the TM engine
prepared by GFR Engines of the Scott Gordon Finlayson.
This is going to be the last round of an amazing season for Verstappen as he won the CIK-FIA KZ World Championship and the two CIK-FIA European Championships KZ and KF, as well as the KZ1 WSK Euro Series and the KZ2 WSK Master Series.
A real record in karting that is even more stunning as it has been scored by a 15 years old driver.
The target is only one, trying and win this final title too to score an historic hat-trick!


TECHNICAL NOVELTY IN BAHRAIN. The Dutch champion will be supported by Jordon
Lennox-Lamb and Felice Tiene, that will be racing with a big technical novelty: the two drivers will be racing in Bahrain for the first time on the TM engine prepared by GFR, which is going to be a good chance for them to show all their value. They will certainly be hunting the full result too and who knows what surprise might come for all CRG fans!

The Japanese Yuta Shiraishi will be racing in KZ with CRG's works driver, while Marcu Dionisios will defend CRG's colors in KF Junior, both drivers experiencing for the first time the TM engine unit.


READY FOR 2014. Euan Jeffery, team manager CRG, commented in this way the eve of this
appointment while eyeing 2014: “The decision was made to give a TM engine to all our drivers in this final race of the season, a round that is very important to CRG. We do not want to leave any stone unturned to try and bring home also this World Championship after winning the KZ1 title with Max Verstappen. We are also working for 2014, devising drivers' lineups and sportive
programmes. We will be present as usual in the CIK-FIA Championships and in WSK Euro Series, but also in the Rotax Euro Challenge were we will be fielding a specific works team. In a few weeks time we will unveil the names of CRG drivers for KZ and KF and for the Rotax championship where we count on being present with a top class lineup”.