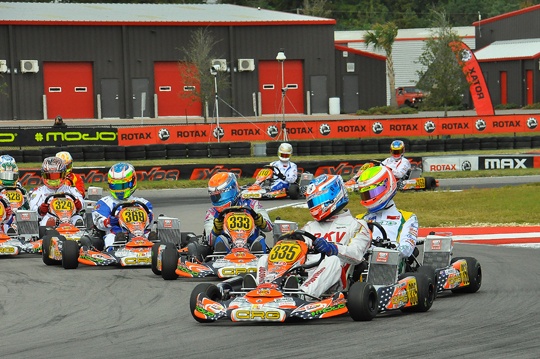 Press Release by: CRG
Juodvirsis, the DD2 winner on CRG chassis in the Rotax Max Challenge Grand Finals. (Ph Media RMCGF BRP)
A spectacular show has taken place in USA at the Rotax Max Challenge Grand Finals. CRG has been partner of the event in category DD2, where the victory was obtained by the Lithuanian driver Juodvirsis from the American Wimsett to the Spaniard Dalmau Caballer. Several excellent victims as the Canadians Cooper, that has been World Champion in 2012, and Ouellette, Champion in 2011.

The karting track located at the of Nola Motorsports Park of Avondale, New Orleans, housed a spectacular show in occasion of the Rotax Max Challenge Grand Finals, that took place in a particularly fascinating setting that had a lot of success in terms of participation with CRG partner of the event as chassis supplier for the category DD2.

A record participation of nearly 360 drivers coming from all over the world, with the best coming from the selections of the Rotax National Trophies completed the success on the technical level where in the most powerful category, DD2 with the shift, CRG shone with the competitiveness and reliability of its karts that have been protagonists in several close races.

VICTORY FOR JUODVIRSIS IN DD2. The rain fallen on-off during the weekend of New Orleans made the event even more interesting and challenged several protagonists. The victory on CRG's chassis in DD2 eventually went to the Lithuanian driver Simas Juodvirsis, who has been 2012 European Champion in KZ2 CIK-FIA and in WSK Euro Series. Podium finish also for the American  Joey Wimsett, second in a sprint finish with the Spanish driver Oriol Dalmau Caballer.

EXCELLENT RETIREMENTS.  Among the most awaited protagonists, the Canadian with British origins Ben Cooper, who was the reigning champion and three time winner of the Grand Finals, was forced to the retirement after leading the race from the first lap; similar fate for the other Canadian Pier-Luc Ouellette, crowned champion in 2011. That has been a pity as Cooper and Ouellette got to New Orleans as the main contenders to the final win after setting the second and third place in qualifying, right behind the pole man Daniel Formal. The American also had to quit early the Final.

Quite unlucky the Belgian driver Xen de Ruwe, who was racing as CRG works driver at the CIK-FIA KZ2 world championship held in Varennes, as he had to retire in the Final after shining in qualifying heats where he put in a victory and two good placings that gave him the sixth place in the standings after the heats.

Italy was represented by DD2 National winner Alex Beggi, but for an unlucky series of events the Italian driver could not get among the finalists despite a good 24th time in qualifying.

THE WINNERS OF THE OTHER CATEGORIES.  The winners of the other categories of the Rotax Max Challenge Grand Finals were: the Briton Oliver Hodgson in Senior, the South African Cristiano Mongado in DD2 Masters, the American Juan Correa in Junior, while in the smallest categories the victory went to David Malukas in Mini Max and to another American, Dylan Tavella, in Micro Max.