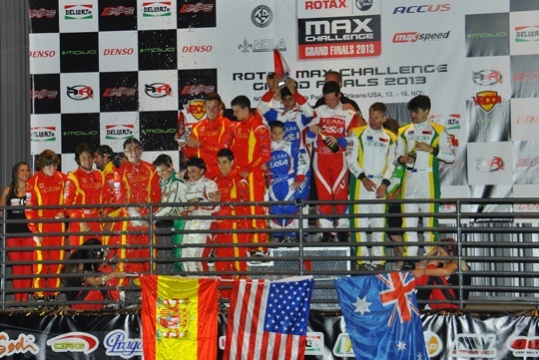 Author: Vroomkart International
The hype around the single-make event of the year was entirely justified by the final day racing in New Orleans. A truly fantastic event, a superb all-round display of what kart racing is all about, with some very exciting action on track all making for what has to be considered the event of year. And in the end, Karting was the real winner.
The 2013 Rotax MAX Challenge Grand Finals exceeded all expectations thanks to superb organizing effort by BRP-Rotax, MAXSpeed and NOLA Motorsports Park. And everything came together with the six enthralling final races of the afternoon.

A huge, packed grandstand hosting over 2,000 spectators was in for some of the most amazing races of the year. And, as you would expect, the wildly cheering locals were the great powerhouse behind the success of Team USA in the various classes, and in the Nations Cup too.

In the Junior category, Juan Correa of the USA was the one to have the stand literally jump with excitement as he crossed the finish line first ahead of Britain’s Ward and Guan Yu after a riveting 15-laps long battle.
In Senior, British driver Hodgson started from pole and after a quite first part of the race came under pressure from Talvar and Eastwood. As the reigning champion faded in the last part of the race, the first two had a huge scrap in final laps, the Brit winning by a mere 0”042, as local hero Oliver Askew came up from 6th to grab the last podium position in the last few laps.
The two gearbox categories saw some early upsets, with DD2 reigning champion Ben Cooper and US karting legend Alan Rudolph in DD2 Masters out in the very first lap.
Lithuanian Simas Juodvirsis was the beneficiary in DD2 after pulling away from the group, as Wimsett and Dalmau had a super-scrap from 2nd in the last phase of the race, the two separated by only 0”035 at the flag. Frantic action also in DD2 Masters, with Morgado building a gap in the first part of the race after a hard fight with Richert and Campbell, the last two putting up some nail-biting last lap action.

In the Micro and Mini Invitational race, the field were all compact with few groups developing by halfway through the race, and very intense racing ensuing. The fight for the win was non-stop, and resolved in both Micro and Mini classes on the very last lap. Dylan Tavella managed to come out on top in Micro ahead of fellow US driver Waithman and Canada’s Woods-Toth, while in the Mini the result is pending due to the exclusion of the final winner Antonio Serravalle from the final due to a technical infringement. US driver David Malukas could be the beneficiary, with Canadian Lupien and Boutot completing the podium.