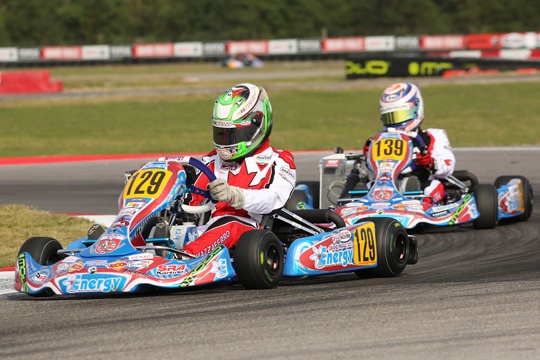 Author: Vroomkart International
Second day of official racing at NOLA Motorsports Park in the books. The usual suspects Cooper, Rudolph, Morgado are making an impact.
The first two days of the Rotax MAX Challenge Grand Finals at NOLA Motorsports Park in New Orleans, USA, saw some of last year's protagonist stand out. With the temperatures unexpectedly low, the superb facility is hosting some outstanding racing action, setting up the ground for a truly exciting finale.

Junior MAX
In the Junior odd qualifying, American Kyle Kirkwood immediately ran the fastest lap time of a 56"589 with Canadian, Jeffery Kingley’s best time of a 56"754 placing in second.
In the heat, the Canadian managed to grab two wins, with the other two going to Vips from Estonia and Harvey from the UK.

Senior MAX
Gil took the pole position with a 55"199 in the first day of official racing, Talvar came in second and Britain’s Oliver Hodgson rounds out the top three.
In the heats, the protagonists of the Rotax Euro Challenge Brand (UK), Morin (SWE), Hodgson (UK) and Talvar (EST) win one heat each and tomorrow's racing is looking to be extremely exciting.

DD2 Masters
A storm of Praga karts drove onto the track the second they were given the green flag. Morgado once again posted the fastest lap time of a 54"814 but was soon beat by US multiple champion Alan Rudolph with a 54"693 and Michel Dauphin with a 54"735 and Morgado qualified rounding out in third.
Rudolph continued in great fashion the following day grabbing two heat wins with Morgado (RSA) and Hunter (AUS) taking one each.

DD2
The DD2 drivers were on fire from the very first official, with Formal beating Cooper for the pole position by a mere 0"004. In the heats, the Brit with Canadian licence grabbed the first, with Belgium's de Ruwe and Brit duo Babington and Slavin taking the remaining three.