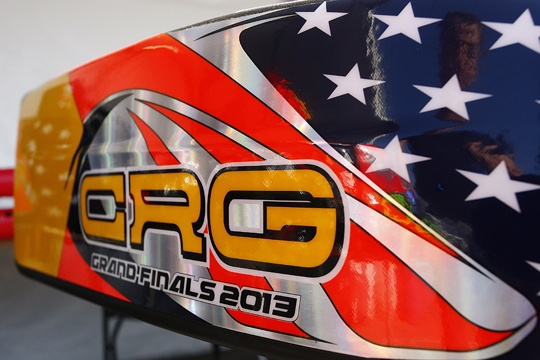 Press Release by: CRG
n the picture, CRG Rotax DD2 chassis in the new livery designed for the worldwide event Rotax Max Challenge Grand Finals of New Orleans. (Ph_Cody Schindel/CanadianKartingNews.com)
CRG is partner of Rotax for the Grand Finals, the worldwide event that will take place in the United States,  New Orleans (Louisiana), where it will provide the chassis of the blue riband category, the DD2. The Rotax Max Challenge Grand Finals is the ultimate international event that will see 288 drivers on track coming from 60 different countries.

CRG will be protagonist in the Rotax Max Challenge Grand Finals 2013, the CIK-FIA event  to take place in the United States of America in Louisiana, New Orleans, that announces to be among the greatest of the already prestigious Grand Finals Rotax, the most important and widespread one-brand trophy that will celebrate this year the 30th anniversary of Rotax engines in karting.

CRG AS ROTAX'S PARTNER IN DD2. CRG is technical partner of the event and chassis supplier for the most powerful category, the DD2 with the shift, that represents at best the competitiveness of the Italian firm.

CRG is a worldwide leader in the manufacturing and distribution of karts, thanks to the constant research of new solutions and the high quality of its products, features that have always characterized the brand that won 75 CIK-FIA International titles in 35 years of business.

CRG's range of products is able to satisfy every request, even the most particular ones: from karts designed for very young drivers to competition karts, developed for drivers ranging from entry-level to professionals. CRG chassis have been chosen by drivers from all around the world and CRG distribution network is always growing, featuring at the moment 70 importers located in the five continents.

GRAND FINALS, A PLANETARY EVENT. A total of 288 drivers will be racing in the 4 categories of the event, that are the Junior, Max, DD2 Masters and DD2 reserved to drivers aged from 15.  72 drivers will be using CRG's chassis, for a total of about 60 countries represented, that is virtually the whole world. All the best drivers of Rotax national championships will partake in the event. The venue of this race will be New Orleans, more specifically the Nola Motorsports Park structure of  Avondale, on the 1.531 meters long karting track. For the third year in a row the very young drivers coming from United States, Canada and Mexico will also compete in the categories Micro and Mini as part of the event.

SEVERAL TITLE CONTENDERS. Among the 72 drivers entered in DD2 on CRG chassis and the long list of title contenders, some big names shine as that of the three times Grand Final Rotax International Champion, the Canadian with British origins Ben Cooper, that is the current DD2 reigning champion, and that of the strong Canadian driver Pier-Luc Ouellette, who has been DD2 Champion in 2011. The Italian flag in the campaign will be waved by Alex Beggi, the winner of the Rotax Italy 2013 Trophy.

CRG President Giancarlo Tinini's comment at the eve of the Grand Finals Rotax follows: “The collaboration between CRG and Rotax has been quite well consolidated over the years and this is the reason why we decided to be partners in the Rotax Grand Finals also in 2013. This event celebrates the nowadays most worldwide known one-brand championship. CRG and Rotax want to carry out an idea of competition open to all the drivers around the world and, at the moment, Grand Finals is the only CIK-FIA recognized event able to represent all the five continents in what is becoming the most important race of the karting field. This year the event will be even more interesting, because after many years finally we have once again an international race with direct drive karts in USA.  The choice to have all the participants competing with the same material makes the race even more winning, because all the drivers start truly on the same level and can show their driving abilities.”

The programme of the event will start on Wednesday 13th November with free practice, qualifying heats will take place on Thursday 14th and 15th November while Prefinals and Finals will follow on Saturday 16th November.