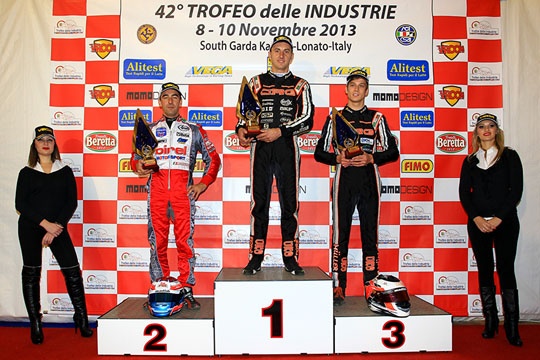 Press Release by: Parma Karting ASD
Davide Forè, winner of the KZ2 Final and of the absolute 42th Trofeo delle Industrie, on the podium with Roberto Toninelli (on the left) and Marcel Mueller (on the right) (Ph. Michele Panzera/Sportinphoto).
Forè obtained the victory in KZ2 and in the Memorial Carlo Fabi. In KF3 the win went to the Russian Vartanyan who led Alessio Lorandi, in KF2 dominion by Ilott,surprising Abrusci in 60 Mini.

The 42nd Trofeo delle Industrie ended at South Garda Karting of Lonato with the absolute victory of Davide Forè, on CRG-Tm run by the Polish team DTK, who also won the Memorial Carlo Fabi Trophy by dominating in KZ2 both Final and Prefinal.

Huge satisfaction also for Parma Karting, the organizers that could celebrate a 42nd edition of the Trofeo delle Industrie in style with a very good number of drivers on track (140 coming from 21 different countries). This edition wasalso made more precious by a good number of international top drivers, like the four times world champion Davide Forè, who put his name on the prestigious Hall of Fame of this event for the second time after winning the absolute trophy in 1989 when he was beginning his driving career.

KZ2. Out of the 48 drivers on track in KZ2, Birel worksdriver and former European champion Roberto Toninelli, ended second behind Forè. He proceeded the Austrian driver Marcel Mueller on CRG-Modena as the latter completed the podium aheado of another former European champion, the Dutch driver Jorrit Pex in force at team CRG Holland who led in the initial laps but then was later on forced to slow his pace. Big disappointment for Marco Zanchetta from Maranello Kart, who had to retire due to a problem to the gears lever when holding P2.
KZ2: 1. Forè (CRG-Tm); 2. Toninelli (Birel-Tm) 1.054; 3. Mueller (CRG-Modena) 4.834; 4. Pex (CRG-Tm) 5.129; 5. Bernardotto (Maranello-Tm) 6.780.

KF3. A very good level of competitiveness was shown in all categories and some surprising results did not miss either, as in the case of KF3 where the Russian Alexander Vartanyan (Tony Kart-Vortex) racing for team Ward Racing managed to clinch the victory taking in the final laps Baby Race's Alessio Lorandi (Tony Kart-Parilla). The latter dominated the Prefinal and most part of the Final but he eventually had to slow down due to a technical problem that relegated him to the second position. The third place on KF3's podium was obtained by TommasoMosca (Tony Kart-Tm). The European champion Lando Norris (FA Kart-Vortex) was slowed down by an incident at the start but then put in a spectacular recover all the way up to the fifth place, right behind his team mate  Max Fewtrell.
KF3: 1. Vartanyan (Tony Kart-Vortex); 2. Lorandi A. (Tony Kart-Parilla) 2.943; 3. Mosca (Tony Kart-Tm) 4.900; 4. Fewtrell (FA Kart-Vortex) 5.921; 5. Norris (FA Kart-Vortex) 9.425.

KF2. Stunning victory for the British driver Callum Ilott (Zanardi-Parilla) in KF2, who just missed out on the absolute Trophy won last year as the driver of Chiesa Corse won the Prefinal but the qualifying lap time played in Forè's favour. Ilott pulled the victoryfrom an excellent Stefano Cucco on Birel, as the latter was second both in the Final and in the Prefinal afterbeing the quickest at the end of Saturday's heats. The third place at the finish line was obtained by another Briton,  Ollie Norris (FA Kart-Vortex), who also managed to temporarily hold the second position in the Final.
KF2: 1. Ilott (Zanardi-Parilla); 2. Cucco (Birel-Tm) 6.788; 3. Norris O. (FA Kart-Vortex) 7.370; 4. Sorensen (Tony Kart-Vortex) 7.429; 5. Kim (DR-Tm) 14.711.

60 MINI. The smallest category, 60 Mini, saw Nicola Abrusci (Tony Kart-Lke) clinching the victory at the end of a spectacular recover from the 18th place in qualifying, followed by the sixth at the end of qualifying heats.  Abrusci started his sprint to the win in the Prefinal where he secured the victory and then managed to repeat the same result in the Final at the end of an exciting duel with Leonardo Marseglia (Top Kart-Parilla). Third step of the podium for another Italian driver,  Domenico Cicognini (Energy-Lke) who led Christian Cobellini (Top Kart-Lke), while the first of foreign drivers was the Malaysian driver Abdul Gafar Muizzudin (CRG/Hero-Lke), sixth after the second place in the Prefinal.
60 MINI: 1. Abrusci (Tony Kart-Lke); 2. Marseglia (Top Kart-Parilla) 0.239; 3. Cicognini (Energy-Lke) 0.433; 4. Cobellini (Top Kart-Lke) 3.801; 5. Muizzudin (CRG/Hero-Lke) 3.859.