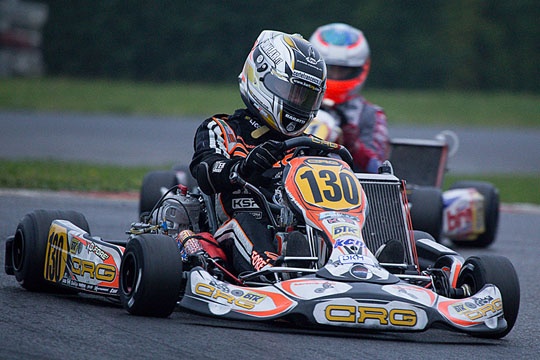 Press Release by: Parma Karting ASD
In the picture: Davide Forè in KZ2 is the winner of two qualifying heats in the 42th Trofeo delle Industrie (Ph. Davide Pastanella).
In KZ2 Forè leaves the mark in the first day dedicated to qualifying heats but the challenge is open with Pex (fastest in qualifying), Dalè and also Zanchetta. In KF2 very good performance by Cucco. In KF3 uncertain situation on top with a duel involving Lorandi, Fewtrell and Norris. In 60 Mini Furrer on top.

A lot of track challenges have taken place at the South Garda Karting of Lonato where the Trofeo delle Industrie is currently underway in its 42nd edition organized by Parma Karting that sees a lot of strong names in international karting. About 140 drivers will be on track during the weekend, with entrants comingfrom 21 different countries, which made the competition quite interesting as a lot of champions are present in all four categories and will be looking to close the season on a high.

The day of Saturday started under the rain but then the situation improved towards a decent weather, and the track witnessed a series of exciting races with all the drivers aiming to get the best starting positions for the final stages on Sunday out of the qualifying heats.

In the highest category, KZ2, 48 drivers were at the start and out of those Davide Forè, on CRG-Tm of the Polish team DTK, put his name forward to get the final victory as he won all his qualifying heats after the fifth time in qualifying.

Among the top drivers, the Dutch winner of the German Championship Jorrit Pex, in force at CRG Holland, secured a stunning pole position breaking the wall of 56 seconds and then pulled a win in the third heat and a fourth in the first.

Very good day also for Andrea Dalè (CRG-Tm) who started from the second place in qualifying and obtained a very good second place in the first heat, followed by the third in the final heat. Marco Zanchetta on Maranello-Tm managed to recover well from a not brilliant qualifying (15th place) and ended his heats in third and fourth place. Positive performance also for Roberto Toninelli (Birel-Tm), who obtained a seventh place in the first heat that was later on improved with a second in heat-3.

Some excellent names will have to recover from some unlucky heats as Massimo Dante, third in one heat and forced to the retirement in the second, while last year's winner of the Trophy Andrea Margutti, the Croatian driver Kristijan Habulin was second in a heat and had to the retire in the other one.

In KF2 Stefano Cucco (Birel-Tm) was under the spotlight, he got the pole position and then two wins out of the two heats he run. Cucco won the last round of the Italian Championship and in this occasion he will have to battle against the Briton Callum Ilott (Zanardi-Parilla), winner of a heat and second in the other, behind Cucco. Among the contenders to the final victory, the Briton Ollie Norris (FA Kart-Vortex), who harvested a second and fourth place in the heats.

The situation is quite open to a good duel in KF3, where the three heats had three different winners; Alessio Lorandi (Tony Kart-Parilla) was the quickest in qualifying and he won the first heat, while the two drivers of team Ricky Flynn – i.e. the British driver Max Fewtrell and his fellow-countryman and European Champion Lando Norris – both on FA Kart-Vortex pulled a win each in the other two heats.

Similar situation in 60 Mini where Robin Rene Furrer (Top Kart-Lke) started on a high with two wins in the heats while the third victory went to a brilliant Domenico Cicognini (Top Kart-Lke). The Malaysian driver Abdul Gafar Muizzuddin (Crg/Hero-Lke) is recovering from the seventh place in qualifying as after the heats he is third. Nicola Abrusci (Tony kart-Lke) is sixth after the 18th time in qualifying. The pole sitter Bogdan Fetisov (Crg/Hero-Lke) ended the heats to the back in 14th place.