Author: Vroomkart International
How do you rate a journey? Usually, the more things you see and do, the higher the vote. So for us, 150 issues of Vroom International magazine is quite an achievement, because during the past 14 years we've seen, done and written some (hopefully) amazing pages of karting history!

Full Speed Ahead
Doing 150 Km/h in karts means that you must have a competitive vehicle, good driving skill and guts. I like to do this similitude with the 150 issues published by Vroom International. Here too, you need a competitive means, ability and guts. However, speed is in our DNA, we aren’t afraid of it, it takes much more to scare us off. Vroom presses hard and looks ahead concentrated on facing the umpteenth challenge, and win.

This is where it all started. With the advent of the new millennium we decided to come out with Vroom International thanks to the support of a few manufacturers, especially Tony Kart patron, Roberto Robazzi who spurred me on to do an international version of the magazine that could transmit the right messages on the international market, and enhance Made in Italy karting manufacturing. It was back in 2000, the strength of Vroom was the same that stood out in those years from the Italians in every sector... Operators all over the world had to match their skill and compete with the power of the Made in Italy, also at a racing level. The reference points were already patrimony of the Italian motorsport culture, except for some rare exception.
With this backing, Vroom managed to achieve an important placing on an international level: if you wanted to know what was going on and innovations in karting, Vroom was a must.
With the magazine well accredited and having managed to gain the interest and attention of operators all over the world, an innovative project developed in this field. It has taken years of hard work to finalise this aim that was shared by many. Vroom Spain came into being, the first magazine tailored for the Spanish market and hence published in Spanish, also aimed at the Spanish speaking countries: all this was made possible thanks to José Omedas’ collaboration. Vroom Spain inaugurates a new route and after a few months there is also Vroom Russia & Ukraine thanks to Vasyl Petrenko’s hard work. Next comes Vroom Brasil, which required much time and attention due to all the bureaucratic, legal requirements necessary for national registration and divulgation of any editorial production, which has taken longer than expected. A big thank you to José Barone and Isadora Dutra who have shared and helped with this project.
Vroom International is celebrating its 150th issue. An important achievement especially today, when things aren’t at all easy. However, my greatest satisfaction is that thanks to this idea, we have got to know the trends of operators and karting enthusiasts from all over the world, and so have our readers.
Vroom continues to cheerish this opportunity with the aim of setting up, in the near future, other collaborations in countries where the editorial line that we have been promoting in the past years is welcome and shared. An editorial line that registers, thanks to these collaborations, continuous improvements as a result of the different aspects and types of racing that our sport produces in the various countries throughout the world, giving lots of important information that helps the growth of karting in each country.
A good karting magazine has to work hard to provide a quality product, also taking the responsibility to underline clever initiatives and at the same time learning from the mistakes that some karting policies might produce. All this knowledge and sharing of information allow us to analyse and study, for better or for worse, how the karting movement is actually doing.  We want to do better, improve, as one does in any field, but first of all it is important to be aware of the world that we live in, and the world that karting enthusiasts transmit with their decisions and knowledge; this awareness is in Vroom’s DNA.
I will also take this occasion to thank Fabina Gavillucci, my wife, who has helped me all along to achieve this goal, not only has she been a great supporter of some daring initiatives, but also a shrewd administrator; Antonio Pepe for his indispensable managerial support in the appreciation of an innovative editorial project, which gave birth to Vroom Digital Version and the expansion of a communication platform via web; Salvatore Murtas for his commitment in bringing along Vroom International and his professionalism in working with operators and collaborators on an international level and Maria Verrengia, supervisor of translations, who has been with us since the birth of Vroom International.
Last but not least, I would also like to thank our readers and all those who share and support the Vroom editorial project. On my behalf, I can only assure you that we will continue to work hard and Vroom will keep going with the aim of giving readers a product that will satisfy the expectations of our sport, always trusting in your indispensable feedback and collaboration. 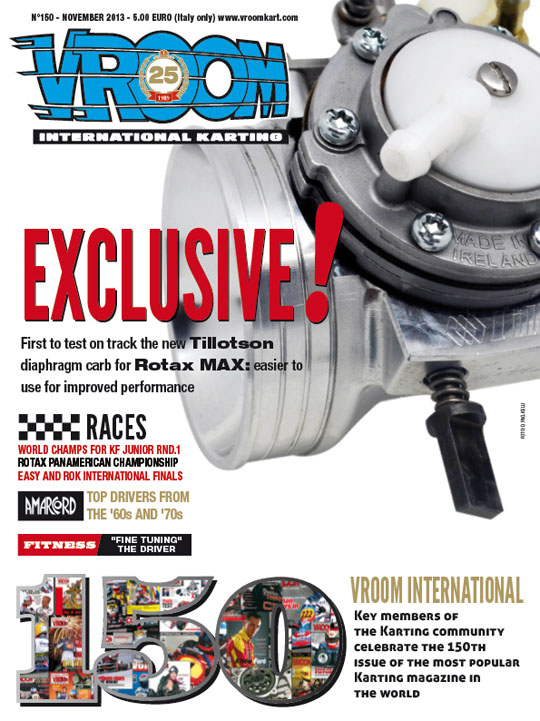 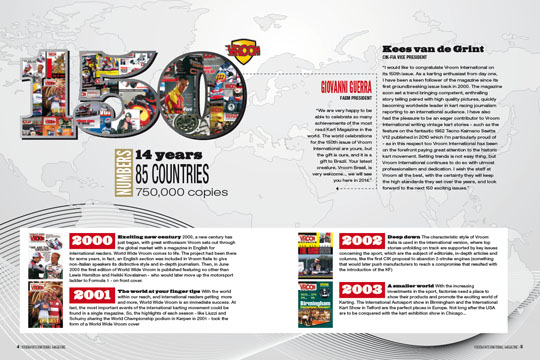 TRACK TEST - Tillotson HM-2A for Rotax MAX
The craze to change float type carburettors used for some direct drive classes for diaphragm carburettors is becoming a tendency. Here we are going to look into this tendency, giving you a preview account of the test carried out on a prototype carburettor made by Tillotson destined for the Rotax Max as well as all other Rotax categories.

BEHIND THE SCENES - Mechanics’ life
Every time a driver steps on the podium, there is a mechanic who has worked behind the scenes who deserves just as much credit and applause. We spent a day at ART Grand Prix during the first round of the KFJ World Championship in Sarno to find out about the people who work for the drivers success behind the scenes.

TALKING TO - Nicklas Nielsen
After a season of outstanding performances but few wins, Danish talent Nicklas Nielsen will play giving all he has at the very last race of the year, the fi nal round of
the World KF Championship in Bahrain and try to make up for a bitter-sweet season with a fi nal sprint

RACE REPORT - CIK World KF Junior Championship Rnd.1
Young Italian knocks out rivals and grabs first round win of the World Championship held in Sarno at the “Circuito Internazionale Napoli”. A winning blow in the final, when everyone was expecting the “awesome Brits” in force with RFM team to attack. This win gives him a great reward for his hard work during heats and prefinal.

RACE REPORT - Rotax Asia/Malaysia Challenge Rnd.6
The Royal Pahang Kart Prix brought the 2013 Rotax Max Challenge Asia & Malaysia Series to an end. All champions, except for the Micro Max class, also got a ticket to the Rotax Grand Finals.

RACE REPORT - Rok Cup International Finals
The Swiss driver grabs the Rok Cup final win in Lonato. In the other classes wins go to Cinti and Bonetti (in Mini, Super and Shifter) win in the three classes, while the Junior class is yet to be decided, it is sub-judge between Durante and Di Cori

RACE REPORT - 12th Easykart International Grand Finals
“Wet” races, but exciting as usual at Castelletto in the international “Grand Finals”, with Michelotto and Pittingale winners in the “important” 60 and 125 cc Master classes. Also great excitement in the Kart Grand Prix won by Game, while Safar storms ahead in the 100 cc and Midrla in the Shifter 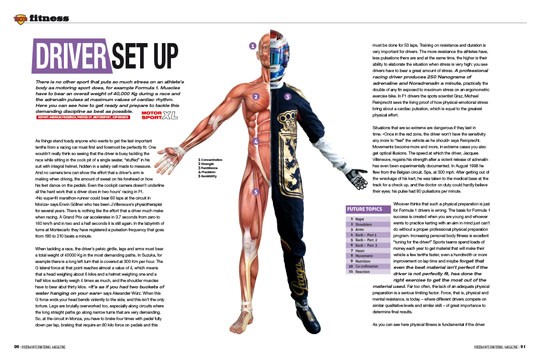 FITNESS - Driver "Set up"
There is no other sport that puts so much stress on an athlete’s body as motoring sport does, for example Formula 1. Muscles have to bear an overall weight of 40,000 Kg during a race and the adrenalin pulses at maximum values of cardiac rhythm. Here you can see how to get ready and prepare to tackle this demanding discipline as best as possible. 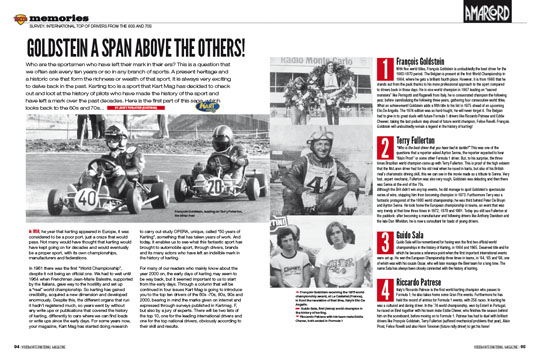 MEMORIES - Top International drivers from the 60s and 70s
Who are the sportsmen who have left their mark in their era? This is a question that we often ask every ten years or so in any branch of sports. A present heritage and a historic one that form the richness or wealth of that sport. It is always very exciting to delve back in the past. Karting too is a sport that Kart Mag has decided to check out and loot at the history of pilots who have made the history of the sport and have left a mark over the past decades. Here is the first part of this saga, which looks back to the 60s and 70s…