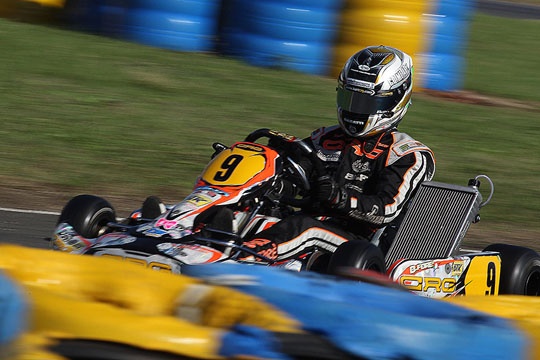 Press Release by: Parma Karting ASD
In the picture: Davide Forè on CRG-TM to be among the protagonists of the forthcoming Trofeo delle Industrie (FM Press).
In KZ2 Davide Forè to compete with team DTK, but Maranello Kart is also hunting for the victory fielding Marco Zanchetta and Massimo Dante. Nice battle is awaited in KF3 among the teams Baby Race, Ward Racing and Richy Flynn.
Very interesting entry listalso in KF2 and 60 Mini.

All is set for the challenge of the 42nd Trofeo delle Industrie, the race organized by Parma Karting that will get underway from 8 - 10 November at South Garda karting of Lonato (Brescia).

The race valid for the Memorial Carlo Fabi is present in the International CIK-FIA calendar and features an interesting entry list with several top drivers among which the 4 times World Champion and 3 World Cups holder Davide Forè in KZ2 who will be at the starting blocks with the Polish team DTK on CRG-Tm, with which he has run a successful season in CIK-FIA International Championships as well as in the WSK Euro Series where he clinched a victory in Genk (Belgium). The team will also take on track the young Polish driver Bartosz Idzkowki.

Maranello Kart will field Marco Zanchetta in KZ2; the Italian driver has put in several bold perforamances in international races and will complete the teams lineup alongside with the Italian Vice-Champion Massimo Dante, Enrico Bernardotto, a driver that is at the debut in this category, the Russian Aleksey Demkin, and the Austrian Christoph Hold who has been among the protagonists of the German Championship.

In KZ2 several other drivers will be among the lot of aspiring victory contenders, such as Andrea Dalè (CRG-Tm), Mirko Colombo on Energy-Tm, the Austrian Marcel Mueller and the Croatian Kristijan Habulin, both on CRG-Modena.

In KF3 a nice battle is to be expected among the drivers of team Baby Race, Ward Racing and Richy Flynn, that are the squads that dominated the whole season in this category. Big names here are Lorandi brothers (Baby Race), the Russian Alexander Vartanyan (Ward Racing) and Lando Norris (Richy Flynn).

In KF2 the attention will be focused on the Brit Callum Ilott, who won the absolute Trophy “Memorial Carlo Fabi” last year.

All information, entry forms and programme are available at www.parmakarting.it