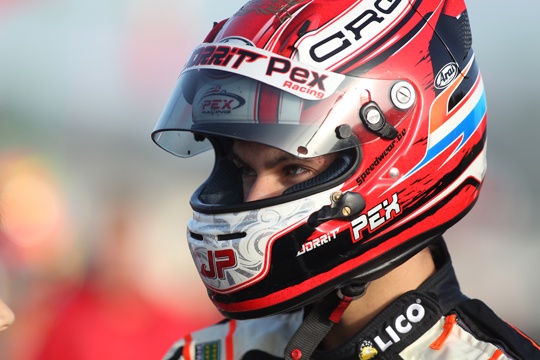 Press Release by: CRG Racing Team
In the picture: Jorrit Pex, winner of the German KZ2 Championship for the third time in a row (Ph. FM Press)
In the fifth and final round of the German Championship held in Genk, Jorrit Pex strenghtened his first place in the final standings of KZ2 with a podium in race-2.  Davide Forè unlucky in both finals after an excellent start in qualifying and heats.

Jorrit Pex celebrated in the best possible way his third consecutive title in KZ2 of the DKM Deutsche Kart Meisterschaft during the final round of the German Championship held at the Circuit of Genk. The driver in force at team CRG Holland got the mathematical certainty of being a champion one race early in Hahn and strenghtened his lead with a good second place in Final-2 after leading the way in qualifying and heats.

Another success that enriches CRG's 2013 showcase as the Italian firm dominated the season throughout winning several titles in KZ and KF of the European CIK-FIA Championship, in the KZ World Championship, in KZ1 of the WSK Euro Seriesand in KZ2 of the WSK Masters Series.

After the four rounds held in Ampfing, Wackersdorf, Kerpen and Hahn, Jorrit Pex has been among the main protagonists also in Genk together with the German driver Kevin Illgen of team Adac Sachsen, who ended third in the championship and Davide Forè that ended sixth on the kart linedup by DTK. In the top ten with CRG chassis were also Stefan Ott, tenth ahead of the two team mates at CRG Holland Finn Kooijman and Jorrit's brother Yard Pex.

Jorrit Pex got the satisfaction of obtaining the fourth pole position of the season in Genk confirming himself to be very quick in all the circumstances on his CRG chassis powered by TM. Pex also won two qualifying heats and therefore he was on the front row of the first final but on a soaking wet race track his start was not perfect and the CRG drivers was pushed to the back. He later on recovered on the dry tarmac, putting the hammer down and started a series of very quick laps (he also set the fastest lap of the race) until reaching the second place behind De Conto who also won the first final. Thanks to the points harvested in Genk Jorrit Pex confirmed his leadership with 188 points, followed by Paolo De Conto (Birel) at 138 and Illgen (CRG) at 110.

“I am happy on my performance at the last DKM race in Genk – said a glowing with happiness Jorrit Pex – as in the first day I got the pole position and won both my heats. In the first final the heavy rain spoiled a bit my race and I lost a few positions in the first lap but then I recovered up to the sixth place. In the second final weather conditions were better and I ended second. I am really proud on being the KZ2 German Champion for the third year in a row!”


DAVIDE FORE’ SLOWED  DOWN IN THE FINAL

Davide Forè has been a bit unlucky in this occasion. He obtained a promising third place in qualifying behind Pex and De Conto, followed by two second places in qualifying heats. He obtained the fifth position in the first final after an incident a third into the race while he was pushing for the second position. Forè later on put in a good recover and set also the fastest lap of the race in the final laps. Forè has been hit at turn one of the first lap in the second Final, but managed to keep on going and finished 17th, a result that earned him the sixth place in the championship. Ahead of this race the third place of the absolute standings was at reach of Forè.

“I would like to thank team DTK – said Davide Forè – for all the support they gave me to run the German Championship as well as to all technicians that helped me. I have always been very quick and also in Genk, but things did not go as I had hoped. As regarding the German Championship, my main disappointment is about the outcome of the races held in Wackersdorf and Hahn, where I had good chances of victory. I am very happy anyway on the result of the season.”