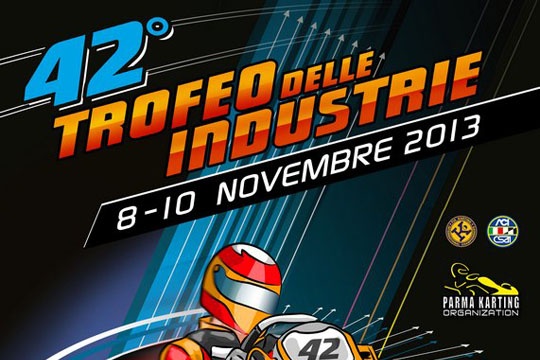 Press Release by: Parma Karting ASD
The race is part of the CIK-FIA International Calendar. Fixed number of participants allowed: 54 drivers in KF3, 34 in KF2, 54 in KZ2, 30 in 60 Mini.

Entry lists for the 42nd edition of the prestigious “Trofeo delle Industrie” - Memorial Carlo Fabi will open next October 10th. The race organized by Parma Karting Asd will be run at the South Garda Karting circuit of Lonato from 8 to 10 November. The event will be open to the categories KF2, KF3, KZ2 and 60 Mini and will be part of the International CIK-FIA Calendar.

Entry lists will be subject to enrollment restrictions and only the first 54 applications for KF3, 34 for KF2, 54 for KZ2 and 30 for 60 Mini will be accepted. The “Trofeo delle Industrie” has a very long tradition, it is in fact the oldest karting race in Italy and it features an extraordinary history started in 1971 at the Kartodrome of Parma where it continued until 2008, year when the race changed venue.

The race will take place at the South Garda Karting circuit of Lonato for the second year in a row. Last year the Trophy “Memorial Carlo Fabi” was won by a young talent named Callum Ilott in category KF3. The victories in the other categories went to the Swede Joel Johansson in KZ2, to the Polish driver Igor Walilko in KF2 and to the American Logan Sargeant in 60 Mini.

The event's programme will begin on Friday November 8th with sportive scrutineering and practice; free practice, qualifying and heats will follow on Saturday while repechage races and the final stages (Prefinals and Final for all categories) will take place on Sunday November 10th.

Entry forms and all information about the race will be available at the website www.parmakarting.it