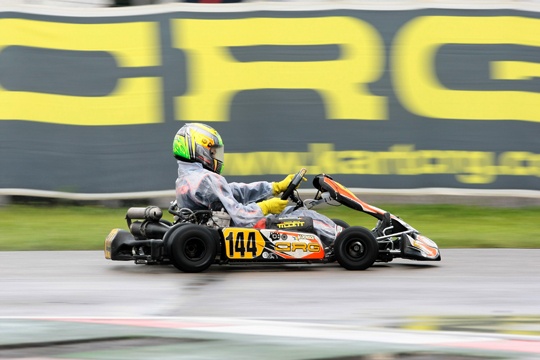 Press Release by: CRG Racing Team
Marcu Dionisios racing in Sarno where he got a 17th place in the Final (Ph. Cunaphoto)
The Romanian driver ended the first race of the KF Junior World Championship in 17th place after being under the spotlight on the wet in qualifying heats and Prefinal. Just one step short of the Final the Argentinian driver Bruno Romano and the Brit Archie Tillett.

The first of the two rounds of the CIK-FIA KF Junior World Championship run at the International Circuit Napoli of Sarno offered “thousands” emotions to CRG works team with its three youngsters giving their best to get a good performance. All three color bearers of CRG managed to make it to the Prefinal with the Romanian driver Marcu Dionisos excellent on the wet 1.699 meters of Sarno, while the British driver Archie Tillett and the Argentinian Bruno Romano put in a “thrust of the back” in the decisive heats run on Sunday morning.

The three CRG drivers had to pay the fee of a not very brilliant qualifying in Sarno. In the heats  Marcu Dionisios (CRG-Bmb) has been very quick under the deluge on Saturday and on the wet of Sunday getting an absolute P13 at the end of a series of heats characterized by spectacular recovers up to the front positions. Archie Tillett (CRG-Tm) managed to qualify for the Prefinal thanks to an increasing performance as did Bruno Romano (CRG-Bmb) who kept recovering from the back of the grid and obtained an excellent sixth place in his heat.

Marcu Dionisios was the only one to celebrate his access to the final though as he was a very good sixth at the end of his Prefinal at the end of a series of very close duels. The Argentinian driver Bruno Romano did not make it to the Final as had to go wide on the grass to avoid some rivals stranded on track ahead of him with only a few meters still to go. That was a pity as the driver from Argentina managed to put in a very good recover from the back of the grid. Archie Tillett was stuck in the back instead and could not show his best.

DIONISIOS SLOWED DOWN IN THE FINAL

Marcu Dionisios was slowed down by an under-performance of the engine after a good start on the dry tarmac of the Final and halfway through he was stuck in the mid-pack to finish 17th in a group of very close rivals later on. The Romanian driver showed a good level of competitiveness getting the most of the qualities of CRG chassis on the wet.

Bruno Romano and Archie Tillett have the regret of not getting into the Final bunch but they showed a good competitiveness anyway at their first experience with such an high ranked International race.