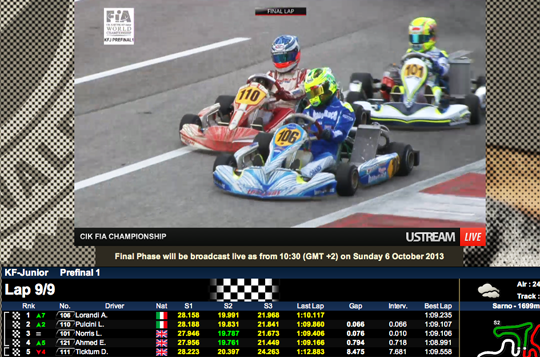 Author: Vroomkart International
In both prefinals of the World KF Junior Championship opening round, the top positions were decided at the very last lap.
CIK World KF Junior Championship Rnd.1, Sarno (I), 4-6 October
In the first prefinal, Alessio Lorandi (Tony Kart/Parilla), Pulcini (Tony Kart/Vortex) and Norris (FA Kart/Vortex) fought for the lead all the way to the chequered flag. Also polesitter Ticktum (FA Kart/Vortex) proved competitive, but had to give in to the three and to his teammate Ahmed who stops the fastest lap of the race (1’08”991).

In the second prefinal, the fight was between Shwartman (Tony Kart/Tm) and Raucci (Energy/Tm), with Indian driver Daruvala (FA Kart/Vortex) joining in after disposing of Florescu (Tony Kart/Vortex) and setting the fastest lap of the race (1’08”810). The last lap proved fatal for the Russian, who got taken by Raucci and Daruvala closing in 3rd.
Out of the top-17 that have access to the final Sargeant, Aubry, Travisanutto, Defourny, Betsch and Sette Camara who showed good speed in the heats.