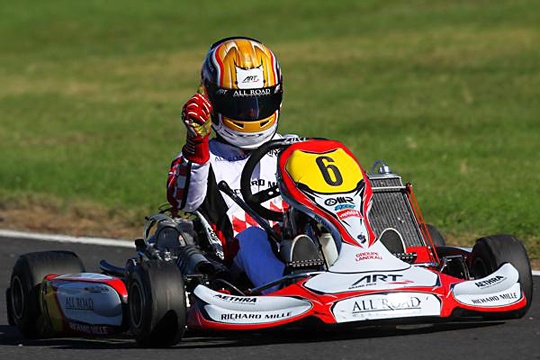 Press Release by: Art Grand Prix
The French World KZ Championship weekend ended on hype for the ART Grand Prix Factory team as young talent Charles Leclerc hit the vice-championship title after an intense, nail-biting final, concluding his Karting career on a high.
How better to end one’s experience in Karting with a heavy result in the most competitive field of the season? This must have been Charles Leclerc and Ben Barnicoat’s thought while approaching the World KZ Championship & International KZ2 Super Cup held in Varennes on 21-22nd September. The two, soon to move on to a single-seater career, certainly did their best on the French circuit, and the results have been positive on both ends, with Leclerc snatching the World runner-up title, and Barnicoat proving one of the fastest drivers at his debut in KZ2.

In KZ, after a troublesome qualifying, Leclerc was forced to start both heats from mid grid racing all the way in comeback mode. A superb 5th and a 11th where good enough for a decent 5th starting grid position in prefinal. Charles’ start was blistering, moving to 2nd in the first lap, and also managing to grab the lead for few laps. Then a frenzied battle ensued, Charles lost few positions only to close 3rd at the end.
With 2nd and 6th in the heats, his more experienced teammate Ben Hanley could take advantage of P3 on prefinal starting grid, but a very heated phase halfway through the race while fighting for the lead would see him drop down to 11th. Ben’s reaction was fierce, as the Brit stopped the fastest lap of the race (51”646) while climbing on to 8th.

Comes the final, and the two ART Grand Prix drivers had some work to do to make it a weekend to remember. And despite starting 6th (Leclerc) and 16th (Hanley), they did just that. Another great start would see Charles move up to 2nd in the first lap, glued to Verstappen in the lead. A hard fight is nothing short of what everyone expected. Charles held tight, lost 2nd for nine laps, then regained it, lost it again and made his move stick with 2 to go, successfully fending off his rival’s attack till the chequered flag. A masterpiece of defensive driving worth the vice-championship title!
In the meantime, Hanley made a superb comeback leapfrogging through the field making up as many as 6 positions in the last 5 laps to finish a stunning 4th, also stopping the fastest lap of the race with 51”767.

Despite not having such a glamorous title to race for, the KZ2 field saw the most competitive drivers in the category lined up on starting grid.
British ART Grand Prix star Ben Barnicoat seemed not that impressed, since he stopped a good 8th fastest lap in qualifying at his debut in the category. The start of the heat session was a bit rocky, as the young Brit had some issues in finding the right feeling with the clutch for a clean start. The first two heats saw Ben having to comeback from mid grid as a result, despite starting from P3. Nevermind, because two heats were quite enough for the Brit to get his act together as he grabbed a 2nd, two 4th and a 6th place in the reaming heats also stopping the fastest lap twice. A promising 7th place on starting grid however proved not enough, with Ben involved in a pile-up right after the start.
ART Grand Prix large line-up in the category saw Oscar Arcila making it through to the final with consistent laptimes, while Poncelet and Kurakin did not make it to the final following some contacts.
Nicolas Todt (Team Owner)
“What a fantastic result for ART Grand Prix Karting : We put our two drivers in the top 5 of the most challenging karting category in the World ! Charles finishes World vice-champion in his first year in KZ and it’s totally deserved following his hard work all year long, his commitment and his speed. He didn’t put a foot wrong during the finale and drove as if he had as much experience as the drivers he was fighting with !
Ben showed that we had a very fast package signing the fastest lap of the finale while he was coming back through the field to finish a strong 4th. That’s a very positive result too and there was no better way to thank the whole ART Grand Prix Karting team for the work which has been done these past months.”
Charles Leclerc (KZ)
“Vice World KZ Champion in my last karting race! I’m really, really happy considering the speed I had in the final! I’m going to miss all of this a lot, and I want to come back as often as possible! I would like to say a huge thank you to everyone at ART Grand Prix for the great job on the chassis, a big thank you to Tm Racing and Fast Kart, and to my two mechanics who have done a perfect job during all week-end. Also, I would like to thank All Road Management, Formula Medicine and Richard Mille, and all the people who have helped me during all these years in karting.”


Ben Barnicoat (KZ2)
“It’s a shame to have ended my international experience in karting without a good final place. But I guess it can’t always get right. I had some real fun racing in KZ2, it’s truly exciting and I’m glad I did this race. I learnt a lot over the weekend, found it a bit hard to get the start right at the beginning, but I proved I was fast and that’s what matters. I wish to thank everyone at ART Grand Prix for the tremendous effort over the past few seasons.”