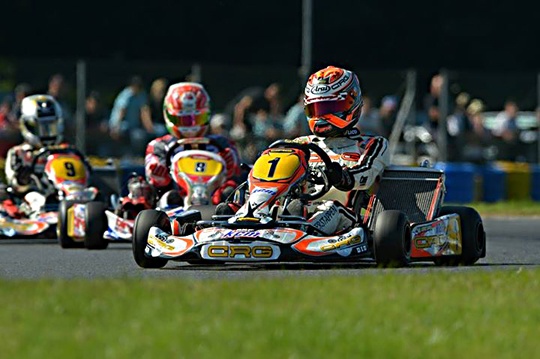 Press Release by: FIA Karting
Motorsports enthusiasts were extremely happy to experience the intense meeting at Varennes where the crowning of Max Verstappen as World Champion was completed.

It was a weekend of spectacular emotions and sensations with sunny weather as a bonus. Maxime Potty in the Academy Trophy and Dorian Boccolacci in the KZ2 International Super Cup were also crowned. Varennes 2013 may register without embarassment as one of the most beautiful pages in the history of international karting, demonstrating the incredible competitiveness of some very young drivers.

He had already won two European titles this season, in KF and KZ: the Dutchman Max Verstappen (CRG-TM-B'Stone) has just reached another dimension by winning the world title in KZ at 15 years old, against experts in the most difficult category. In timed qualifying, we could see that competition for the title would be epic. The great Davide Fore (CRG-TM-B'Stone), the four time World Champion, began by winning the Superpole. The double World Champion Marco Ardigo (Tony Kart-Vortex-B'Stone) was then in front in the qualifying heats and the first prefinal. But Verstappen’s rating rose several notches in view of the way he won the second prefinal. Driving an extremely well prepared machine under the direction of his father, the F1 driver Jos Verstappen, Max seemed to have the advantage. After a reasonable start in the final, it only took him four laps to settle permanently in the lead before flying irresistibly to victory. Slowing down the pace on the last three laps, Max won the race, still more than three seconds ahead of his pursuers and thus the World Champion, the youngest in the history of karting in a gearbox class. A sign of the times, a driver of the same age, the Monegasque Charles Leclerc (ART GP-TM-B'Stone) moved up to the second step of the podium after a bumpy journey ahead of the British Jordon Lennox-Lamb (CRG-Parilla-B'Stone) of 21 years. The competition was boosted by achievements at all levels. Ben Hanley (ART GP-TM-B'Stone) made up 12 places in the final to finish just off the podium with the fastest lap of the race, and Bas Lammers (Intrepid-TM-B'Stone) performed a similar recovery up to sixth position with the brilliance he shows so often, even when the equipment is not as fast. The Spanish F1 driver Jaime Alguersuari (Tony Kart-Vortex-B'Stone) finally returned to the top 10. Highly ranked in the prefinal, two drivers had to retire when they were featuring prominently in the final: Patrik Hajek (Praga-Parilla-B'Stone) on the first lap and Paolo De Conto (Birel-TM-B’Stone), on the fourth lap.

At 13 years old, the Belgian Maxime Potty finished 2013 as the winner of the CIK-FIA Academy Trophy, a competition for young talents racing on one-make karts Parolin-FIM-Vega. Arriving at Varennes with a good lead in the standings, Maxime again showed maturity and racecraft that allowed him to avoid hazards and to fight for victory with panache. After the fastest time in timed qualifying for the French driver Gautier Becq, another Belgian, Gilles Magnus dominated the qualifying heats. But the best performance of the weekend was from the Turkish driver Berkay Besler, the winner of both races at the meeting and third overall. The Italian Edoardo Tolfo was conspicuous with his second place in race two, while the Spaniard Arturo Melgar was placed 3rd in both races so clinched the second place trophy. The French driver Adeline Prudent, supported by the 'Women in Motorsport' program of the FIA, confirmed her excellent performance by taking fourth place in the standings.

Varennes also hosted 90 entries in the KZ2 International Super Cup, again mixing experience and talented young drivers. The French driver Alexandre Arrue (Praga-Parilla-B'Stone) opened the scoring by taking pole position in timed qualifying. Each competitor then took part in in six heats, a total of 21 qualifying races in which there many twists. The Italian Riccardo Negro (DR-TM-B'Stone) regained the lead in this difficult year ahead of the New Zealander Daniel Bray (GP-TM-B'Stone) and another Italian specialist, Marco Zanchetta (Maranello-B'Stone-TM). But two rookies 'made in France' were distinguished: Dorian Boccolacci (Energy-TM-B'Stone) in fifth and Thomas Laurent (Tony Kart-Vortex-B'Stone) 7th. Boccolacci also won prefinal 1 against the Italian Simone Brenna (TB Kart-Modena-B'Stone) and Negro, while Bray won prefinal 2 followed by the Czech Jan Midrla (Birel-TM-B'Stone) then Arrue. In a very open final, Bray led three quarters of the race before the climax of the final laps that saw the Italian Loris Spinelli (CRG-TM-B'Stone) take the lead after a climb of 10 places and Boccolacci who imposed in only his second race in 125 gearbox. The ranking is however suspended behind the winner after Spinelli, second on the podium, was then penalized by the sporting committee. Arrue is therefore tentatively placed third in front of Bray.