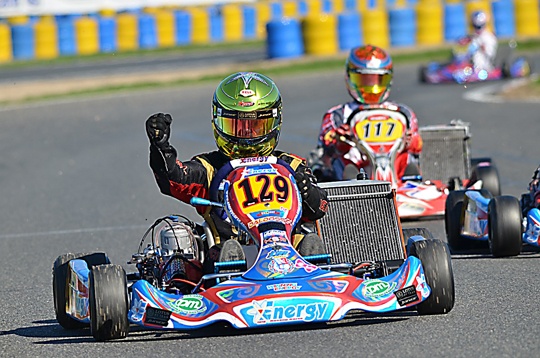 Author: Vroomkart International
True, the real debut of the young French driver in the cadet gearbox category happened a week earlier in Lonato during the Italian Championship, but the hardest test was the one in Varennes in the International KZ2 Super Cup.
Photos M.Nicoletti

We ought to start from the end, the one that matters most. The French Energy driver fights against the best in the category, always at the top during the entire weekend. The list of favourite is long, and includes Negro and Antonsen (DR/Tm), New-zealander Bray (GP/Tm), Czech Midrla (Birel/Tm) and Italians Zanchetta (Maranello/Tm), Brenna (TBKart/Modena Engines), Marcon (Tony Kart/Vortex) and Spinelli (Crg/Tm). Also, the group of fast French drivers Arrue (Praga/Parilla), Laurent (Tony Kart/Vortex) e David (Tony Kart/Modena Engines), and two more rookies Barnicoat (ART Grand Prix/Tm) and De Ruwe (Crg/Maxter).

The heat session shows that experience does matter, with Negro and Bray taking the pole in the two prefinals, and Zanchetta and Midrla completing the front rows.
Prefinal 1 sees Negro and Zanchetta getting in each other’s way letting Boccolacci through. The French stays in command till the very end, piling up over 2” advantage on Brenna. Prefinal 2 is spiced up by the fight between Bray and Midrla, who quickly move away from the rest of the field with Bray never relinquishing the lead.

The final is very intense, Bray gets off to a good start, keeps the lead for 16 laps when Spinelli and Boccolacci move past. Shortly after the New-zealander gets demoted from 3rd by Arrue, and the fastest lap is only enough to keep Negro at bay for 4th. With two laps to go, the French sneaks through past the Italian on the inside taking a well-deserved win, proving quite at ease in such highly competitive field.