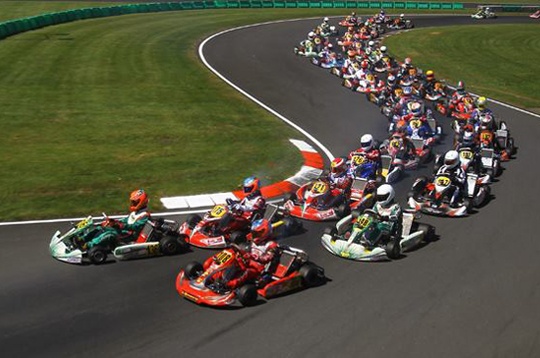 Press Release by: FIA Karting
The next CIK-FIA meeting at Varennes will not be short of titles as no less than three drivers will be rewarded at a global level.

On Sunday evening there will be a new KZ World Champion, the winner of the Academy Trophy and finally the winner of the KZ2 International Super Cup, a competition that is not just European with 19 nationalities represented, in the tradition of the World Cups. Capable of uniting every generation and all passions, the Historic Karts will carve out a beautiful place, no doubt to applause.

The last World Champion in 125cc gearbox was crowned in 2000 at Mariembourg (BEL), Gianluca Beggio, when the top category was still called Formula C. With the success of the current KZ, the CIK-FIA decided this year to award a world title again to reward the best in karting. Today KZ is the focus for more experienced drivers, often professionals, who have greatly contributed to the history of karting. At Varennes prestigious names will compete for the world title. In addition to Jonathan Thonon (CRG-Maxter-B'Stone) and Bas Lammers (Intrepid-TM-B'Stone) who have shared the World victories since 2007, will be other confirmed Champions of the game: Marco Ardigo (Tony Kart-Vortex-B'Stone), Davide Fore (CRG-TM-B'Stone ), Roberto Toninelli (Birel-TM-B'Stone), Arnaud Kozlinski (Birel-TM-B'Stone) we hope has recovered from his accident, and Ben Hanley (ART GP-TM-B'Stone). The talent looking for victory is not lacking with Anthony Abbasse (Sodi-TM-B'stone), Paolo De Conto (Birel-TM-B'Stone ), Jorrit Pex (CRG-TM-B'Stone), Jordon Lennox-Lamb (CRG-Parilla-B'Stone ), Rick Dreezen (Tony Kart-Vortex-B'Stone), Yannick De Brabander (Maranello-TM-B'Stone) and Jérémy Iglesias (Lenzo-LKE-B'Stone). The list of young people who will soon start car racing begins with Max Verstappen (CRG-TM-B'Stone) the European title holder, and Charles Leclerc (ART GP-TM-B'Stone). Finally, the presence of the F1 driver Jaime Alguersuari (Tony Kart-Vortex-B'Stone) adds an interesting point of comparison to the competition.

With 92 entries, the KZ2 International Super Cup is full. It is a match between France and Italy, two countries that together account for nearly half of the drivers. However, any forecast is impossible in such an event, with very important heats and varied competition. Among the most prominent this year include Emil Antonsen (DR-TM-B'Stone) the European champion, Marco Zanchetta (Maranello-TM-B'Stone) and Riccardo Negro (DR-TM-B'Stone) who have always been shoulder to shoulder, Joel Johansson (Energy-TM-B'Stone), Jan Midrla (Birel-TM-B'Stone), Alexander Schmitz (Tony Kart-Vortex-B'Stone) or Nicola Marcon (Tony Kart-Vortex-B'Stone). Also recall the good performance from the New Zealander Daniel Bray (GP Racing-TM-B'Stone) in 2012. In addition to all of the recent defectors from KF, Ben Barnicoat (ART GP-TM-B'Stone) and Dorian Boccolacci (Energy-TM-B'Stone), there are very experienced drivers like Alessandro Manetti (Praga-Parilla-B'Stone) or Julien Poncelet (ART GP-TM-B'Stone). But nothing can ensure that the winner is one of this list.

The young Belgian Maxime Potty has a good lead in the standings of the Academy Trophy, just under 40 points, but was dominated in both races at the previous round in Italy by the Brazilian Pedro Piquet while the Spaniard Arturo Melgar maintains contact in third position. The Estonian Ralf Aron, 4th, remains a devilishly consistent opponent ahead of the German Mike Beckhusen in 5th. As for the French driver Adeline Prudent, in 6th, she is able to surprise many competitors. The 33 entered will meet in Varennes as a litmus test for the Academy Trophy in 2013 at the wheel of identical machines drawn by lot, using the Parolin chassis and FIM motor equipped with Vega tyres.

To cater for the growing interest of fans and the public, the club has decided to integrate Historic Karts into the event at Varennes. All participants are sure to win since their only objective is to be there and share their interest in these amazing machines that have shaped the kart today over the last 50 years. In several demonstrations on track, they will have the opportunity to spread the virus to more and more followers.