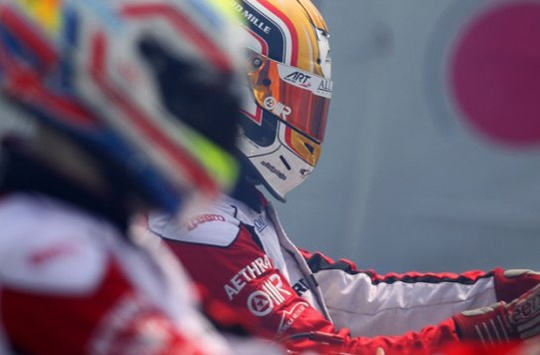 Press Release by: Art Grand Prix
Besides the experienced, reliable pair Hanley-Leclerc in KZ, the Factory Team managed by Armando Filini will field an unprecedented 7 drivers in KZ2, including 2012 European KF2 Champion Ben Barnicoat, at his first official outing in the gearbox category.

Following ART Grand Prix consistently good performance in KZ during the season, embellished by the one-two at the Winter Cup in Lonato (I), Hanley’s runner-up title in the WSK Euro Series and Master Series, and Leclerc’s podium in the European Championship in Genk (B), the Karting Division has gone well beyond expectations by always be in contention for the win in all major international events. ART Grand Prix supreme effort in gearbox categories has gained the Italian Manufacturer a brilliant reputation in so far as to receiving several requests for driver’s support also in KZ2 category.

The Factory Team’s line-up will therefore see Ben Barnicoat making his shifter-kart racing debut in the International KZ2 Super Cup, next to as many as 6 drivers from ART Grand Prix satellite teams. So far, the young Brit has had a KF season of ups and downs with the 3rd step of the podium in the WSK Euro Series and the runner-up title in the Master Series, followed by disappointing results in the two European Championship rounds and in the World Championship opener, despite the great potential. Ben will certainly look forward to make up for it in Varennes, where a good result could bode well for the remaining part of the season.

In alphabetical order, ART Grand Prix drivers that will take on the grids in Varennes on 20-22nd September.

Martin Doubek from the Czech Republic

“In Varennes we will have a very strong line-up both in KZ and KZ2. Hanley and Leclerc have already proved to be very competitive in KZ, and Barnicoat will have his first taste of an international race in the gearbox category to hopefully end the season on a high note, as he will be moving to cars next year together with Leclerc.

In KZ2 we will field a total of 7 drivers, as the category is expanding fast in many countries. This season we’ve had many requests from our distributor network, particularly from Russia, France and Germany, and our KZ2 market is likely to increase next year.

We will introduce some developments on the chassis in Varennes, as well as the aluminium/ceramic braking system for all our drivers, which will certainly allow us to move a step forward and to enhance our performance.”