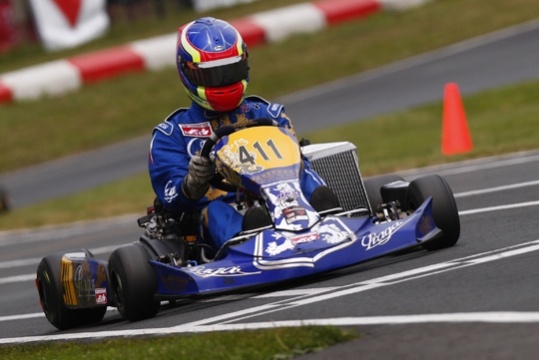 Press Release by: IPKarting
Together with its dealers from Praga Racing Ontario, IPK Quebec and JDL Distributing, a squad of thirty-one drivers represented IPK in all nine of Canada's official classes, reaching the podium in five and winning with both two-stroke and four-stroke Praga chassis. In a week-long affair that is the greatest meeting on Canadian soil, IPK North America proved beyond a doubt it can deliver on the grandest of stages.

“We have had great results all year long and it was just perfect for things to be in top form at the biggest event of the year,” said Team Manager Marco Di Leo. “The team worked hard in preparation for this one and two National Championships and three World Final tickets later we accomplished what we set out to do. We look forward to adding to the story in NOLA!”

Rotax Senior driver Tyler Kashak was the only team driver to score a Canadian Tire SuperPole Award, but by the end of heat racing IPK North America had a pair of team drivers sitting in pole position heading to National Prefinals. Zachary Claman DeMelo had moved to Rotax Senior pole and Tyler McCullough was on pole in Briggs & Stratton Junior. Xavier Harris in Rotax Micro-Max, Kashak and Di Leo were also starting from the front row.

When the National Finals began, Di Leo himself put Praga on the podium first when he finished runner-up in DD2, and in the very next Final McCullough came through to win a Junior National Championship! Harris was then next up the steps for the team, finishing third in Micro-Max, before Claman DeMelo won Rotax Senior with Kashak joining him on the podium in third. Fan favourite Elvis Stojko was next by finishing second in DD2 Masters, and John Cariati was right behind him in third, bringing the podium total to seven.

“It was a great feeling to see our drivers from youngest to oldest accomplishing so much at Nationals,” Di Leo concluded in looking back. “It's just a great feeling to help direct these drivers to reach their potential and achieve their karting goals. Three team drivers are now headed to the Rotax Max Challenge Grand Finals, and at the ECKC finale next week we could be adding to the tally once again with Joshua Cunha and Francis Mondou. It'll be a great way to end yet another strong season.”

IPK North America will wrap up its Canadian season next week at the Eastern Canadian Karting Championship finale in Mont-Tremblant. For more information on how IPK North America and its dealer network can assist you there, please contact: marco@goodwoodkartways.com