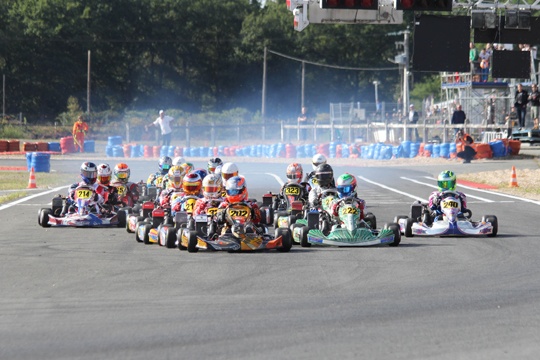 The DD2 category started the final day with a dramatic news: due to a dispute with his team FK Racing Team championship leader Xen de Ruwe withdrew from the event and was unable to participate in the final race, thus losing any hope for a possible title win. On the other hand Ben Cooper (KMS Europe) seized his chance. The reigning world champion celebrated a double win in the finals, taking the title in DD2 class.

In the DD2 Masters classification Cristiano Morgado (Josh Hart Racing) won both final races ahead of his teammate Alessandro Manetti. Although he was not on the very top the latter gathered enough points in order to take the overall win in the championship.

Josh Price (Price Racing) and Lando Norris (RL Racing Dept UK) took the final Junior wins of the year, while Connor Hall and Guan Yu Zhou (both Strawberry Racing) fought for the title, both being placed on the podium positions in the end. Finally the rivals were equal in points. As Zhou had the best final result, he was the one being crowned new champion.
As for the Senior category the reigning world champion Charlie Eastwood (Strawberry Racing) did not take any risks. He took a third and a second place in the final races, profited by a disqualification of his opponent Harry Webb (Strawberry Racing) and in doing so won the championship. Both race wins went to Kylie Fowlie (Strawberry Racing), who took his biggest success in the Euro Challenge so far.

A full report about the entire weekend follows soon. Although the season of the Rotax Euro Challenge is over now, there is one last highlight to come: from 21st to 27th of October Zuera (ES) is venue of the Rotax International Open, marking the last chance to qualify for the Rotax Grand Finals in New Orleans (US) in November and free and assisted places to the 2014 Rotax Winter Cup. Moreover all Open drivers will entered into a free lottery draw, where one person in each class will win one complete free season in the 2014 Rotax MAX Euro Challenge.
All told there are seven last chance tickets waiting for the best drivers. And there is even more news: the provisional calendar for the Rotax Max Euro Challenge 2014 is almost set. Dates have been scheduled, only waiting for the venues to be approved. So stay tuned on the official website www.rotaxmaxeurochallenge.com, where you get all information regarding reports, photos, results and live TV stream.