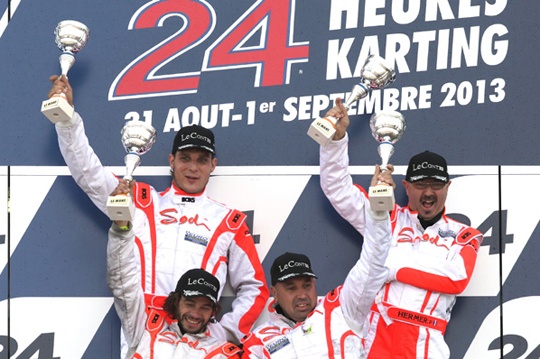 Press Release by: Sodi Kart
Although the situation has completely changed with the inauguration of the new Le Mans circuit, Sodi triumphed for the fifth consecutive Karting 24 Hours with the two winning RTKF teams managed by Claude Jamin.

The record for the distance covered in 24 hours was defeated by a sizeable distance by Sodi No. 1 with 1519 laps or 2119 km on the clock and an increase of 115 km. Already holding pole position after Q1, Anthony Abbasse, driving the same kart, also posted the fastest lap on Sunday morning. It was still a Sodi which won GP2 with Sodi / Rotax No. 11, which also dominated much of the race overall. Another achievement at this 28th running of the event, the Handikart team drove their Sodi to the finish in the top 20. Finally, the Minikart 24 Minutes was won by Permal driving a Sodi Delta. The love story between Le Mans and Sodi continues!

«Such a success is impossible without the fruitful collaboration that we share with Sodi,» explained Claude Jamin at the end of the competition. «It is not by chance that we got our fifth straight win with the French brand that has given us the absolutely perfect Sodi Sigma S2 this year. The new ACO circuit is beautiful, faster but also safer than the Alain Prost. We had to adapt to this new configuration, both on the track and in the pits. Reliability was more important to target given the scope of the new site. Thanks to the preparation work of the Boulineau brothers, the KF engines have been no concern, not even the spark plugs or valves during the long neutralization.»

Taking advantage of the small problems for the leaders early in the race, the team of GP2 Sodi No. 11, also under the banner of RTKF, long held the overall lead, a feat for a Rotax in GP2. However, the No. 1 kart regained the lead in the night and on Sunday morning there was an internal fight between Charles Fiault and Anthony Abbasse to improve their fastest lap. Abbasse finally had the last word with a lap of 54’’ 000. «We have worked to minimize tyre wear,» said Claude Jamin « yet the Sodi could not afford to do without the sixth set that LeCont allowed. So when we put the new tires on at the end of the race, the times have fell!»

The performance of Sodi No. 11 in GP2 worried the GP1 competitors for a while. For the first time, a Rotax led the race for several hours. The first participation of a team of disabled drivers in the 24 Hours of Le Mans Karting without doubt raised passions in advance of the event. The 20th place finish for the Loire - Handikart team commands respect for these drivers with strong characters driving a Sodi.

The traditional preamble for the 24 hours, the Minikart 24 Minutes saw victory too, both in the pre-final and the final for the young Martinican Guillaume-Emmauel Permal and his Sodi and in a nice contrast to the Coupe de France of the discipline after a struggle at loggerheads between the protagonists.