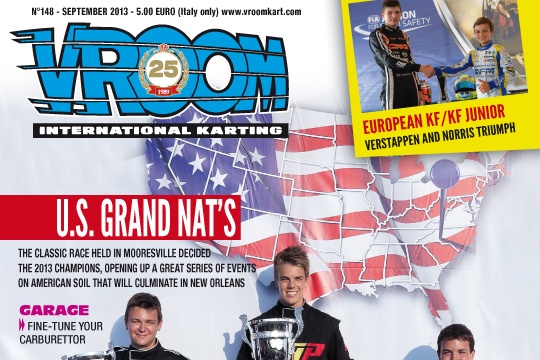 Author: Vroomkart International
We are sure September issue is worth the wait! The preview of the recent World KF Championship opener was an essential feature next to the fantastic U.S. Rotax Grand Nationals that opens a great series of events on American soil culminating with Rotax Grand Finals in New Orleans. Also, we unveil the Praga DD2 and OK1 Micro chassis supporting the Rotax Grand Finals, and we tell you all about the European KF-KFJ Championship final in Ortona.

RACE REPORT – CIK-FIA European KF-KFJ Championship Rnd.1
The KF-KF Junior European Championship has been fought out along the short straight before the second turn… from which neither of the two favourites for the title - Nielsen, KF leader and Norris in KFJ – came out safe. The ones with an advantage over their rivals in Ortona are Max Verstappen and Valentin Moineault, who grabbed the title and KF final win. Instead in the Junior, Ticktum dominates, but Norris manages to make the most of his 25th place to gain the title thanks to a better result in the previous round...


GALLERY - European KF-KFJ Championship @ Ortona
Our photographic gallery from the decisive round awarding the continental crown.


CLOSE UP – Ricky Flynn Motorsport
Ricky Flynn and his team have certainly made the success story of the 2013 season. After years spent as one of the most interesting realities in the international karting scene, the team created, managed and bossed by Ricky Flynn himself has finally found the right mix starting to pile up one success after the other.


CLOSE UP – Rotax Grand Finals Chassis Part I – Praga DD2 / OK1 Micro
The new Praga and OK1 chassis developed for the 2013 Rotax Grand Finals and Invitational Race are not just a brush up or a make over of the original version. Months of testing have been completed to develope the Dragon and the Speedy chassis, developments aimed at improving chassis and components alike, making the equipment easier to assemble and to set up, still keeping an eye on material used and geometries. Let’s see what the Praga Dragon DD2 and OK1 Speedy Micro for the Rotax Grand Finals 2013 are going to be like!


TRACK TEST – Day set up in varying conditions
We did a test to see what happens on a normal test day, with varying environmental temperature and asphalt changes. 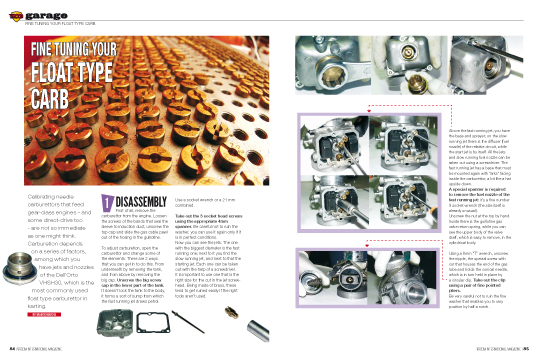 GARAGE – Fine tuning your float type carb
Calibrating needle carburettors that feed gear-class engines – and some direct-drive too - are not so immediate as one might think. Carburetion depends on a series of factors, among which you have jets and nozzles of the Dell’Orto VHSH30, which is the most commonly used float type carburettor in karting. 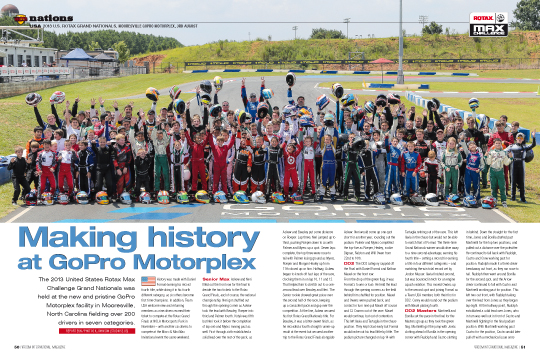 NATIONAL RACES
The U.S. Rotax Grand Nationals open our National Races section, with the classic American race beginning a series of world-class events that will peak with the Rotax Grand Finals in New Orleans on 13-16th November.
Next, we feature the 5th round of the Eastern Canadian Karting Championship at Le Monaco Trois-Rivieres, where few titles were awarded. The 4th round of the German DKM Championship also awarded the crown in one category, similarly to the CIK Stars of Karting Championship in Australia. The Polish season past the halfway mark, as Denmark played host to the Rotax Nordic championship. 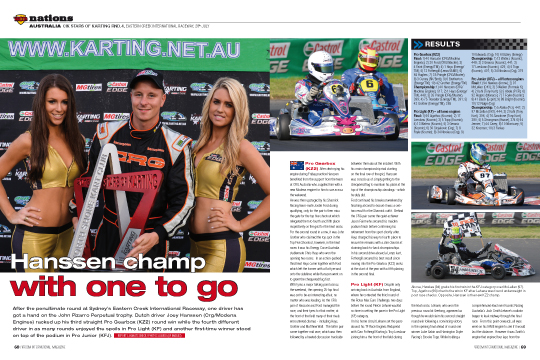 COLUMNS – Mondokart, VroomMama, October National and International race calendar
The World KF Championship opening round at PF International preview opens the news section. The 2014 schedule of the Rotax Challenge of the Americas is released; the IKA-KART2000 exhibition show in Offenbach is almost completely booked; SuperOne announces the launch of the Rotax Academy in the UK; while Italian race series Ciak goes international in the winter.
Kids – and parents - get some advice on Image in our dedicated column VroomMama.
We wrap up the issue with the national and international calendars for the month of October listing 20 major national events from 12 countries, as well as 6 international races.