Author: Vroomkart International
The CIK-FIA World Cup for Super KF/KF1 and the CIK-FIA Asia-Pacific KF2 Championship resulted in great finals on the Suzuka circuit, with a rather unexpected finish in the top category, Super KF.

Winner of one heat but penalised 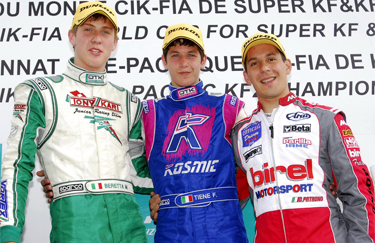 in the other, de Brabander took the start of the pre-final from 12th, which did not prevent him from working his way up to first place on the 6th lap and staying there till the finish. In pole-position for the final, the 18-year old Belgian showed he had the nerve to withstand the pressure from drivers such as Gary Catt, the Japan Champion Sasaki and Arnaud Kozlinski. Having previously won several international races, de Bradander achieved his first major success in a CIK-FIA event and therefore adds his name to the list of results of this prestigious World Cup.
Starting the final from the fifth row, PDB Racing Team Manuel Renaudie made a superb recovery, also setting the fastest lap time of the race, forcing Arnaud Kozlinski (CRG-Maxter) down to 3rd place with four laps to go. The final Top 10 was completed by Marco Ardigò, Jonathan Thonon, Aaro Vainio, Daiki Sasaki (first classified Japanese competitor), Jason Parrott, Oliver Rowland and Armand Convers.
Supporting event of the CIK-FIA World Cup, the Asia-Pacific KF2 Championship was undecided until the finish line. The Italian drivers had a stranglehold on the podium, Felice Tiene (Kosmic-Vortex) prevailing over Matteo Beretta (Tonykart-Vortex) and Giacomo Patrono (Birel-Parilla). Winner of the pre-final, the Briton Ben Cooper led the final before he had to give in to Tiene three laps from the end and then fell back to fifth place on the last lap.

Find all results on www.cikfia.com