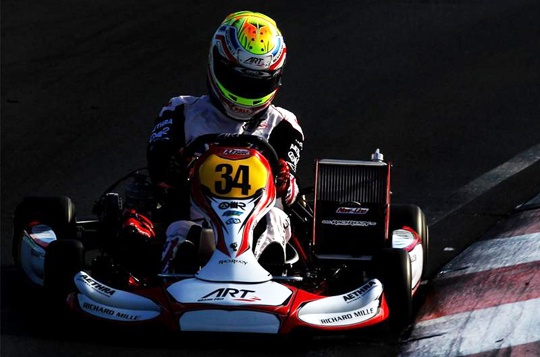 Press Release by: Art Grand Prix
The opening round of the CIK-FIA World Championship held at Brandon (UK) saw Ben Hanley hit a fantastic podium after a nail-biting final.

The experienced Brit proved competitive already in Friday’s qualifying, stopping 8th fastest lap despite having yet to find the ideal set-up. Saturday was a whole different story, with Ben able to fine-tune his equipment which allowed him to clinch a 3rd, a 5th and a 2nd place. Only a mechanical problem to the chain, which forced him to retire halfway through the second heat while strongly in 3rd position, prevented the Brit from closing the heat session in the top-5.

Also his younger, very talented and fellow Brit teammate Ben Barnicoat improved considerably on Saturday grabbing one 3rd and two 4th places despite qualifying only 22nd. Too bad for the contact with Tiene in the third heat, in which Ben got pipped from behind in the opening lap that saw him drop at the very back of the field. With one bad heat, Barnicoat and Hanley took the prefinal starting grid from row 3 and 4 respectively, but their pace would see both drivers protagonists in the top group, with Hanley able to move up all the way to 2nd in the early laps and easily holding on to the position until the chequered flag. Barnicoat also came up very strong steadily moving up the order to close in 4th.


The two prefinal system would mean that only the top 17 drivers of each would go through the final, with the ART Grand Prix team losing both Tujula and Borrelli (at his first race in KF after moving up from the Junior category) not making it to the cut line.


Despite a difficult weekend, both the vice European Champion Valentin Moineault and impressive debutant Takuya Okada from Japan made it to the final, just like Finn Simo Laaksonen closing a superb 7th from 12th on starting grid.

The final was extremely action-packed from the go, with Hanley putting some relentless pressure on 2nd placed Nielsen, the two swapping position and dicing almost at every corner. The fight went for 2nd went on for the first 4 laps, when Hanley got passed with a hard overtaking on turn 7 losing momentum and allowing three more driver through. On lap 6 the experienced Brit settled into 4th after two clean moves on the inside, studied his direct rival and then moved past him for 3rd with 6 laps remaining, not quite enough laps to close down on 2nd. With 16 points to his credit, the World Championship is still up for grabs in the last round in Bahrain in November.

Barnicoat’s race would not be one to remember unfortunately, with the 2012 CIK European Champion out in the second lap while strongly in 4th as a result of an unusual problem to the spark plug. Takuya Okada continued to impress by closing in 23rd from 31st on starting grid at his second international race in the category.

In the CIK-FIA International KFJ Super Cup, the ART Grand Prix boys struggled very early on for pace on a circuit that allows no mistakes. Best result on the heats was taken by Josh Smith at his international debut in Junior, finishing 8th in his first heat. In such high level field, the ART Grand Prix team showed some good pace, also with Xia and Sette Camara, but the team is in for more work to get to the World Championship event in October even more competitive.

“I am usually quite optimistic after results such as Hanley’s, but I am not completely satisfied with the PFI results because Barnicoat certainly deserved better luck. Hanley did very well to grab the podium, we had the pace to close in 2nd but we can still have a say in the last round. Obviously, with Barnicoat also in contention we would stand more chances.

We have to mention also Okada’s performance, at his second KF race of the season, and Josh Smith’s in Junior who made a truly promising performance at his debut. Our Junior drivers still lack a bit of experience, but the pace is definitely there.”

“What a weekend, and what a race! We did well to improve steadily after qualifying, we found those tenths that allowed us to fight at the top. Shame for the final, where the initial scrap with Nielsen held me back a little, but 3rd place still gives me a chance to fight for the title in Bahrain.”


“I must admit it’s been quite a frustrating day! I was up to P4 in the opening stages of the final when my spark plug broke inside and dropped into the engine! We would have definitely deserved more, but I wish to thank the team and everyone who came to support me at the circuit.”