Author: Vroomkart International
Created in 1991, the CIK-FIA Karting World Cup, traditionally held in Japan, will take off in the next couple of hours. The World Cup for Super KF & KF1 is coupled with the Asia-Pacific KF2 Championship.

Get the live action on www.cikfia.com/Live/Live_Suzuka_2009.html

Compared to the previous two 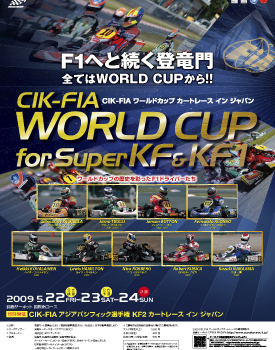 editions, the 2009 World Cup has gathered over twice as many entries in the top category! On one hand, most manufacturers will be present and have decided to send to Japan their best drivers, and on the other, the regulations have been adjusted so that B licence-holders will henceforth be eligible for the Super KF & KF1 categories, which has enabled more local drivers to enter. Japanese teams and drivers, as well as savouring the pleasure of rubbing shoulders with the European elite, will clearly make it a point of honour to demonstrate their competitiveness and the excellent level of their national championship, the “All Japan Karting Championship”.
Provisional leader of the European Championship, the Briton Jason Parrott (Birel-Parilla) will be in the limelight, just like Frenchman Manuel Renaudie (Gillard-Parilla), Belgian Yannick de Brabander (Intrepid-TM), Finn Aaro Vainio (Maranello-Maxter) and Britain’s Oliver Rowland (LH-Maxter), Robert Foster-Jones (FA-Vortex) and Richard Bradley (Maddox-Maxter). Starting grids will also see the presence of double World Champion Marco Ardigò, Vice-World Champions Libor Toman, Gary Catt, Arnaud Kozlinski, and four times World Champion and last year’s winner in Suzuka Davide Foré. Also, Ben Hanley from Britain who raced in GP2 last year will make his comeback to karting. With its 18 representatives, the organising country will be the one with the biggest number of entries, led by Takamoto Katsuta (4th in KF2 in 2008) and 2008 Japanese Champion Daiki Sasaki.
With 41 entries, the Asia-Pacific KF2 Championship will cut a fine figure, bringing together a very talented European delegation and the best Japanese kart drivers. Winner of the 2008 CIK-FIA Viking Trophy, the Russian from Siberia Maxim Zimin will be one of the European leaders, with the Italians Felice Tiene, Aniello Smarrazzo, Matteo Viganò, Ignazio D’Agosto and Matteo Beretta, the Brit Ben Cooper, France’s Brandon Maisano and Portugal’s David Da Luz. And for Japan, Nobuharu Matsushita and Hiroki Ohtsu will be among the protagonists of the weekend.

Find more information, media and all results on www.cikfia.com/News2009/Suzuka.htm

Get the live action on www.cikfia.com/Live/Live_Suzuka_2009.html