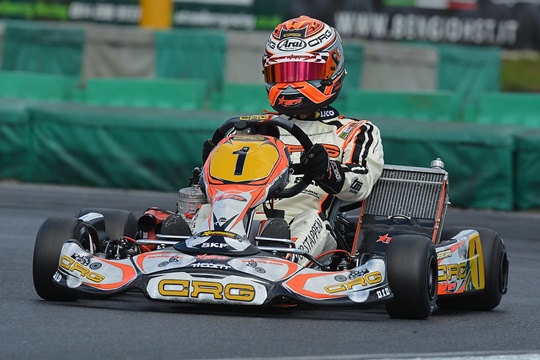 Press Release by: CRG Racing Team
The first round of the World Championship KF under way in England witnessed the unquestionable superiority of CRG and Verstappen in the heats at Brandon's circuit. Very good chances also for Lennox, Palou and Tiene, as well as for Tillett in KF Junior. Only Nylund in KF is delayed in the provisional classification due to some incidents at the start.
The stunning moment of CRG and its drivers is continuing in the first round of the World Championship KF and Super Cup KF Junior in England at the International Circuit PF of Brandon. The magic moment is mainly, but not only, coinciding with Max Verstappen's performance that has been unbeatable in all the sessions and heats run so far putting in a splendid poker of wins on his CRG chassis powered TM by CFR Engines.

Honour in the British round of KF also for Jordon Lennox-Lamb (CRG-Bmb), Alex Palou (CRG-Parilla) and Felice Tiene (CRG-Parilla), and then for Archie Tillett (CRG-Bmb) in KF Junior. Quite Niclas Nylund (CRG-Bmb) has been quite unlucky so far in KF as he has been involved in several different incidents at the starts. Anyway all is still to be decided on Sunday September the 1st with the two Pre-Finals that will award drivers with access to the KF Final in the afternoon. The Pre-Final in KF Junior will decide the starting grid of the corresponding Final.

VERSTAPPEN RULING.  Max Verstappen has been the absolute ruler of the first part of the British weekend as he has been unbeatable in all the sessions, even when in one of the four heats he has been forced to gain ground from P7 due to a light contact at the start. The Dutch driver, fresh European Champion of the category, managed to climb all the way to the victory also in this case and collected four wins in four heats. Really impressive!

Good recovers, as expected, in Lennox, Palou and Tiene's heats as the three drivers had to gain some positions due to the not so brilliant qualifying run on Friday. What a recover! In the heats Lennox scored a second, a fourth and two fifth places, Palou a third, a fifth, a sixth and a ninth place while Tiene, despite a technical problem in one heat obtained a second, a fourth and a fifth place sliding in the main protagonists of the final stages.

PROVISIONAL CLASSIFICATIONS. The general classification after the heats of the World Championship category KF is the following: 1st. place for Verstappen,  7th. Palou who gained Lennox position as the latter was relegated from the fifth to the ninth place due to a penalty; 14th. Tiene, while Nylund is quite far to the back (50th). In KF Junior the Briton Tillet is surprisingly 4th in the general standings at his first real International race in this category.


All the results will be available on the web sites www.cikfia.com and www.cikfiachampionship.com