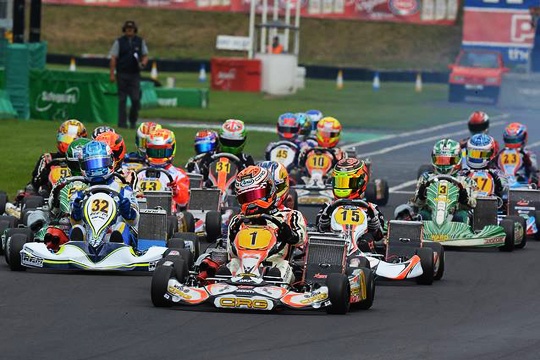 Author: Vroomkart International
The first round of the World KF Championship at PF International reaches the final stages after Max Verstappen (Crg/Tm) dominated the heat session with an unmatchable pace.
Photo CRG P.O.

Four wins out of four heats for the Dutch driver, constantly lapping more than 2 tenths faster than his rivals, resulting in the pole position for prefinal 1 on Sunday afternoon (the two prefinals system with the first 17 drivers of each having access to the final is the standard this year). A hesitant start in last heat cost Max the lead, and a rushed overtaking attempt saw him drop down to 7th. But the comeback is almost a formality, in the remaining 10 laps the Dutch takes his rivals one after the other, making it stick also with race leader Russell at the last lap.

Dane Nicklas Nielsen (Kosmic/Vortex) also proves his top form grabbing three wins and one 2nd place, worth pole start in prefinal 2. Row 1 completed by the Chiesa Corse duo Joyner-Stroll, with the Canadian showing some convincing pace by taking two wins. Always in for a scrap in the leading group were Hansen and Basz on Tony Kart/Vortex, Crg duo Palou-Lennox-Lamb, as well as Kodric (FA Kart/Vortex) and Snell (Energy/Tm).
Hanley (ART Grand Prix/Tm) and Tiene (Crg/Parilla) will certainly be among the protagonists in the final phase as they were in the heats, but they closed the intermediate classification outside the top-10 due to a bad heat. Also Barnicoat (ART Grand Prix/Tm) had to race his socks off following a difficult qualifying, as it was for Hiltbrand (LH/Tm), Russell (Kosmic/Tm) and Boccolacci (Energy/Tm) forced to overcome few difficulties over the weekend.

Odd episode for French driver Armand Convers (Kosmic/Vortex), 2nd in qualifying and then stopped by meds after a contact in the second heat for a swollen hand. Despite his reassurance and a fully functioning hand, it could be the end of the World Championship for the French.

Consistent run for Lorandi
In the International KF Junior Super Cup, Italy’s Alessio Lorandi (Tony Kart/Parilla) grabbed prefinal pole start following one win and two 2nd places, sided by Indian driver racing with Ricky Flynn Motorsport team Jehan Daruvala. Row 2 for Shartzman (Tony Kart/Tm) and Tillett (Crg/Bmb), row 3 for Martin and Lehouck, while Ticktum (FA Kart/Vortex) won two heats but will start from row 4 (next to Aubry slightly off pace) as a result of an exclusion in the first for overtaking with yellow flags. Row 5 for Betsch (Tony Kart/Vortex) and Ahmed (FA Kart/Vortex) the two coming in contact in the last heat with the Brit getting a penalty as a result.
Uncharacteristically disappointing performance for the current European Champion Lando Norris (FA Kart/Vortex) twice on the grass at the first turn and forced to two difficult comebacks. In the last heat he tries to gain the inside after the start, he loses few positions but at least he manages to close in 4th after an exciting scrap with Betsch. He will start the prefinal from row 6 next to De Francesco (Tony Kart/Vortex).


Prefinals will start at 11.40am GMT, while finals will get going at 14.15 GMT. You can follow the Live Streaming on www.cikfia.com