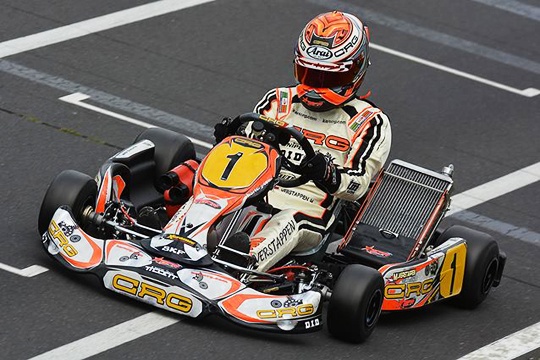 Author: Vroomkart International
The waiting for the official qualifying of the World KF Championship first round at PF International is finally over.
photo CRG P.O.

The Dutch Crg driver grabbed the pole position with a staggering lap clocking 54”228 despite only proving fastest in two of the ten free practice sessions, and being able to go below the 54”3 mark only once before.
The gap with his rivals is substantial, with French driver Armand Convers on Kosmic proving second fastest with a 54”400 lap. Very close at few hundredths ended his teammate Nicklas Nielsen, then George Russell racing on Kosmic after dropping out of Birel, and Callum Ilott.

The heat session will get going tomorrow morning starting from 10.20am GMT. You can follow the Live Timing on www.cikfia.com