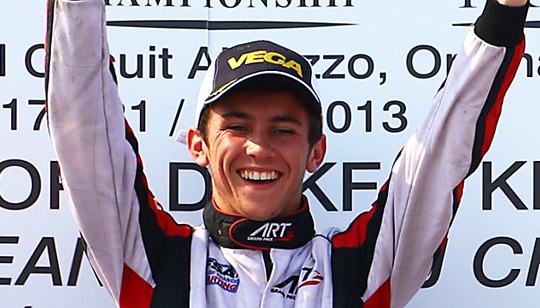 Press Release by: Art Grand Prix
The second and final round of the European KF & KFJ Championship held at the Circuito Internazionale d’Abruzzo, Italy, ended up with the win and vice-championship title of French driver Valentin Moineault in KF. But the start of the weekend was anything but promising.

The ART Grand Prix squad arrived in Ortona in top shape after the positive outing in the first round in Alcaniz, and the rewarding performance in KZ three weeks before.

In KF, the first day of official sessions proved to be extremely frustrating. Ben Barnicoat, who could still have a say in title fight thanks to the 7 points grabbed in Spain, was only able to stop the 14th fastest time, due to unstable track conditions. Moineault’s qualifying session was plagued by his rear tyre coming off leaving the French a very limited time to put on a decent qualifying lap. To make things worst, Friday ended up discomfortingly for ART Grand Prix with the disqualification of Barnicoat from his first heat while strongly in 4th as a result of a rule infringement (he didn’t rejoin the field at the rear after having received assistance from his mechanic).

The following day, the heats continued to be up and down for the ART Grand Prix boys – with the exception of Barnicoat scoring two wins and one 2nd place – as Moineault managed only one top-10 result and then was hit by two accidents in the other heats, and Collard was forced to race all heats in comeback-mode starting from the rear due to a bad qualifying, yet showing tremendous pace.

Sunday’s prefinals could only bear more fruits for the ART Grand Prix drivers, but the optimism was soon forgotten when Barnicoat was taken out in lap 2 by a rushed overtaking attempt of a rival. Moineault instead brought a spark of hope in the team with a superb comeback which saw him gradually moving through the field to close in 8th position after starting from P20, also stopping the fastest lap of the race with 56”576. The start of the second prefinal saw the abrupt end of Collard’s weekend, the British driver getting hit by a rival’s kart following some confused action after turn one. With the race red-flagged, the Brit promptly received medical attention and was taken to the hospital with a punctured lung, collar-bone and ribs broken.

After the big scare, all hopes were on Moineault from the Factory Team and Finn driver Laaksonen from ART Grand Prix Finland, the only two to make it to the final.

Despite having used the new set of tyres in the prefinal, the French shot off at the green lights with a blazing start, moving from 15th on starting grid all the way 8th in the first lap. Not even the time to realize Valentin’s escalation, he disposed of two more drivers in the next lap and started to aim at a top-5 spot. The French driver’s pace was blistering, his concentration unwavering, and a podium place seemed more and more within reach. With the halfway mark gone, things started to heat up among the top three. Valentin made the decisive move for 4th, and then for 3rd with only 6 laps to go. The podium seemed not enough at this point, the French driver bridged the gap shadowing the leading duo, who went in each other’s way opening the door for the lead. Without hesitation, Moineault grabbed the lead and never looked back for the remaining two laps, scoring a fantastic win as well as the fastest lap of the race (56”762), and enough points to move him up to 2nd in the championship standings. The Finn tried to comeback from the last row, but fighting was too hard to make a decisive leap in the order, finally closing in 27th place.

In KFJ, the weekend proved anything but smooth with far too many race contacts involving all ART Grand Prix drivers at some point. Peltola and Sette Camara were the best two after the heats, making to the prefinals with a decent starting grid position. Also Haapalainen showed consistent pace with two results in the top-10, but was inflicted a penalty in two heats dropping him down in the intermediate classification. The two prefinals-system was of assistance to some ART Grand Prix drivers in reaching the final phase, where Sette Camara proved the best of the lot. Starting from 11th, the Brazilian raced a solid prefinal that saw him finish in 8th, with a good chance to finish the final in the points. Also Haapalainen and Peltola reached the final, while Borrelli and Xia didn’t manage to recover from the rear grid starting position. The final didn’t repay Sette Camara’s great start from 15th to 8th, as he soon dropped midfield unable to make up positions.

“Of course we are very happy for the final victory and the vice-championship title won by Moineault, but we cannot be entirely happy with how the weekend went. There are too many problems with the structure of the event that end up forcing drivers into mistake, particularly the younger drivers of the Junior category. The two-prefinals system doesn’t work if the use of tyres during the weekend is not regulated, and the championship points award system makes everything even more of a gamble, while consistency of performance should be rewarded instead.

My final thought goes to Ricky Collard, injured in an accident in the prefinal. Everyone at ART Grand Prix wishes him a prompt recovery.”

"It’s fantastic! At last we’ve managed to steer a weekend in our favour after a season of bad luck, and the reward is so sweet. I want to thank ART Grand Prix, everyone in the team and my mechanic for helping and supporting me, I’ve done my best as always and this time everything worked in my favour. The start of the weekend has been somewhat troublesome, but the pace and speed were always there and we showed it by stopping the fastest lap in the prefinal and final, where the equipment worked perfectly well. I’m so happy for the victory, but the vice-championship title is truly unexpected!"

“It was a very good championship for me. In both rounds our equipment was very competitive, I was also able to win a heat race in Spain and finish 4th and 5th in two heats in Ortona. My pace was good but in the final I was stuck in a battle and couldn’t make up positions. I want to thank everyone in the team and my sponsors. I'm sure that we will get even better results in the second half of the season."