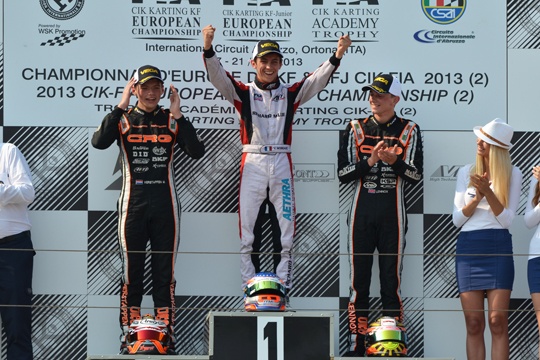 Author: Vroomkart International
The European KF Championship final starts with a bad news for championship leader Nielsen, forced out in the first lap after a very rough encounter with Lennox-Lamb..
photo © M.Nicoletti

CIK European KF Championship Rnd.2, Ortona (I)
Verstappen grabs the lead straightaway shadowed by Basz, with the two left to fight for the title as well as for the win. Tiene, Lennox-Lamb, Boccolacci and Convers follow behind.
All eyes are on the two leaders, who lap very similar laptimes in a fight of nerves. Meanwhile, French ART Grand Prix driver Moineault is on a charge. Starting from row 8, Moineault makes up positions one after the other and soon is on the tail of the CRG duo. By half way through the race, Tiene and Lennox exchange position, and few laps later the French driver moves past them both and starts chasing hard the leading duo. With two laps to go, feeling the pressure from the French, Basz takes over the lead, but the Dutch driver doesn't want to miss the opportunity to double the continental title he recently grabbed in KZ and takes him back in soon after, the two getting in other's way and allowing Moineault to take the lead. Only one lap left, and the ART Grand Prix grabs an unexpected win ahead of Verstappen, while also Lennox moves past the Polish driver.

Verstappen, 2nd at the chequered flag is the new European KF Champion, with Moineault bagging a victory and enough points for the vice-championship title.

After the podium, Lennox-Lamb was inflicted 10" penalty for the accident with Nielsen, advancing Basz to 3rd, a megre consolation for the Polish driver who had the crown within reach for almost the entire final and instead was also beat by Sorensen for the 3rd place in the championship (the two tied at 29 points) due to a better result in the previous round.