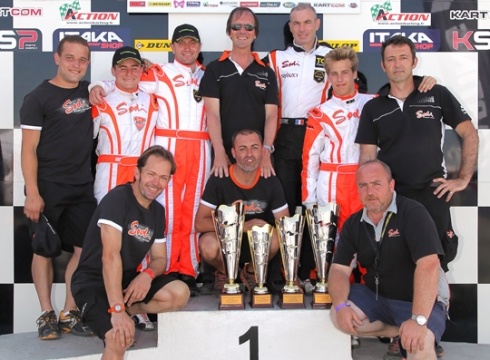 At the same time those loyal to the French brand performed well at all levels. The world leader in the karting market, Sodi has pushed hard since the start of the season to help its drivers to victory and success is coming at a good pace in all categories.

In the sweltering heat of more than 30°, the cream of French Rotax found theirselves at Ancenis this past weekend of July 14. The Breton track is known for its many bends that put drivers and chassis under strain, a true test, especially as the grip was particularly high for this event. Sodi prepared with their usual seriousness and its teams were able to rely on equipment at the top level that no longer needs to be refined to meet the needs of everyone. With two French Championship titles, and three karts in the top four of the 32 years plus class, and two in the younger, Sodi has exceeded its goals!

In Rotax Masters, the category for drivers older than 32, Olivier Paris, driving a kart prepared by Sodi-Shop, began his victorious march in the qualifying heats, which he finished as leader. The driver from Ancenis was no longer worried. With the consistency of a metronome, he led the race by setting the fastest lap three times and dropping his pursuers by several seconds. A true celebration ended with a beautiful national crown. The two fastest laps that escaped Paris went to another Sodi driver, Franck Rouxel, who after an incident in the prefinal was able to climb from 14th place to the podium in the final. Also very fast, Jacques Gautier was successful for Sodi with fourth position.

The scenario played out very similarly in Rotax Max with Vincent Fraisse in the title role. The young Gautier Becq (Team WinMax) put his Sodi on pole in qualifying, but Fraïsse then regained the lead with an impressive consistency of performance. The driver from Ludo Racing more or less won all his races with a lead of between 2 and 7 seconds, the fastest on the track in each one. This is a well deserved French Championship! Nicolas Picot (Team Pro Kart Racing) gave the French brand a superb double, coming back from 12th place after the heats to the second step of the podium.

It’s not just in Rotax that Sodi chassis are prominent this season. The French Minikart Cup has just been won by the young Theo Nouet at Laval, while there were four Sodi finishing in the top seven. The winner of the final Angerville, Adrien Renaudin used the competitiveness of his Sodi Cadet to maintain second in the provisional standings of the French Championship with a real chance to win in late July.

On the international scene, Anthony Abbasse is among the best performers in the premier class after his 3rd place in the European Championship, while at the same time Sodi clearly dominates the Euro-Endurance and French Endurance Championship with the team Sarthe RTKF and is first in the manufacturer rankings.

These are real firecracker performances that the Sodi drivers are engaged in with even greater promise for the coming months.