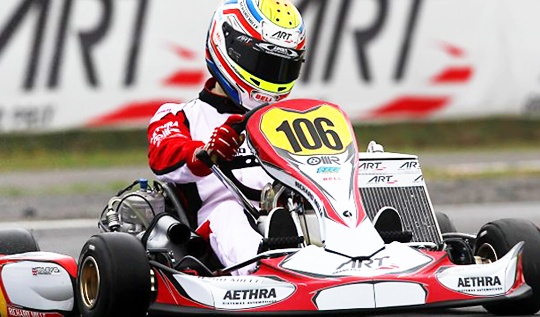 In KZ2, Ben Hanley proved unbeatable pulling off an almost-perfect weekend. Day 1 was extremely impressive : Pole in qualifying practice with 46”589 beating by over a tenth the second fastest driver; two straight wins in the heats (also stopping the fastest lap in both); and victory in Final 1. And the performance of the equipment was particularly outstanding in this occasion. In fact, at the green lights the Brit had a hesitation and got taken by his team mate Leclerc first, and by Verstappen in the following lap. But Hanley could take advantage of a superior pace that allowed him to regain the lead after 3 laps and to grab a 1”923 win over Leclerc (3rd in qualifying and twice 2nd in the heats), also stopping yet another fastest lap. Leclerc proved just as fast, as he followed in his team mate footsteps getting rid of Verstappen on lap 6 for 2nd and keeping him behind till the chequered flag, stopping the second fastest lap of the race in the process.

Day 2 started off in the same fashion, with Hanley and Leclerc beating the competition with a 1-2 in the first heat (this time the fastest lap was stopped by the young driver from Monaco), the Brit snatching the win from his team mate in the very last lap. The second heat saw Leclerc having a better start than his team mate and take the lead, but only for one lap, as he then dropped one position and Hanley two, unable to regain it over the remaining 12 laps.
Starting Final 2 from 1st and 3rd respectively, Hanley and Leclerc pulled off a brilliant performance dominating the opposition, with Leclerc also making it to 2nd place for the first few laps. By grabbing 1st and 3rd at the chequered flag, Hanley and Leclerc secured 2nd and 4th in the championship, with the driver from Monaco tied on points with the 3rd placed driver.

In KF, Ben Barnicoat was in for a true fight in his quest to the vice-championship title. Arriving in Castelletto in 3rd position only 21 points adrift from 2nd, the young Brit knew he could make the leap in the standings only with a stellar performance. And he did just that. Following a positive qualifying practice where he stopped the 3rd fastest lap only 0”035 off pole position, Barnicoat raced three safe heats clinching a 2nd and two 3rd places to start the prefinal from 3rd. This was the moment for real business, where the first championship points of the weekend were up for grabs. And rule number 1 says not to spoil the weekend. So Ben kept off trouble at the start, tailed the leading trio for the first two laps and then moved past to grab 2nd where he would finish. With 20 points in the bag, and his direct rival not present, the mission was almost accomplished.

Ready for the final battle, Ben charged off at the green light and grabbed the lead, which he was able to keep only for few laps. In fact, a bad set of tyres had the young Brit dropping to 4th unable to fight for the win. But his determination proved stronger than adversities, when he slid past to 3rd with 5 laps to go keeping the position till the flag. Double satisfaction for him, with a podium in the final and the vice-championship title to crown a very positive weekend.
New addition to the team, Takuta Okada from Japan had a very promising first part of the weekend by stopping the 9th fastest lap in qualifying and taking 9th, 14th and 13th in the heats, also showing a consistent pace. The prefinal was quite tough, with Takuta dropping to 24th in the first lap from 12th on starting grid, finally closing in 18th. And the final was almost a repetition of the previous race, with the aggravation of getting excluded as a result of an accident.

In KF Junior, Brazilian driver Sergio Sette Camara was in for replicating the very positive performance of Alcaniz, and all seemed going in the right direction when he finished 5th in the first heat, and 8th in the second. Comes the third heat, and Sergio got involved in a race accident forcing him to retire, and the fourth heat saw him fight hard for 6th, finally closing in 8th. With the two-prefinal system, only the first 17 of each prefinal qualify for the final, and the target was brilliantly met with Sergio closing in 10th, later advanced to 8th due to some drivers collecting penalties. Starting the final from row 8, Sergio was in for some good championship points, but a crash in the first lap had his weekend irreparably compromised.

ART Grand Prix took the opportunity to test its equipment in 60 Mini, the category reserved to younger drivers, with Domenico Cicognini, who proved extremely competitive grabbing 3rd in the final after performing consistently well also in the heats (4th, 1st, 2nd).


Armando Filini (Team Manager) “Everyone has done his best in Castelletto, I’m very proud of all ART Grand Prix drivers, team members and of our equipment. Ben and Charles had a fair fight in KZ2, no title was at stake so they were free to battle, and it’s just what they did. Our job is to teach our young drivers that no rival will ever back off, the sooner they learn it the better. In KF our performance was still missing that little bit that makes the difference from winning and finishing 2nd, we will have something new in time for Ortona. In Junior, Sette Camara had a good weekend, too bad he was taken out in the final. One final note for 60 Mini, a category that will see us more and more present in the future.”

Ben Hanley (KZ2) “At last, we managed to be on top from start to finish. This result repays all efforts, energies and cancels my disappointing weekend in Genk. Day 1 was just superb, Charles and I were always the fastest on track, and we proved that we can beat the recently crowned European Champion. Next stop in Varennes for the World Championship, where we will definitely have a say in the title fight.”

Ben Barnicoat (KF) “I took second in the championship, so I can't be too disappointed. But I should have won the final to be honest. Unfortunately, I ended up with a bad set of tyres. I had two big blisters on the left rear and a slit in the front right that caused the kart to slide around a lot. So I wasn’t fast enough around the corners and I was too slow picking up speed coming out of them. But second in the series is the best I could have got from the weekend so I’m happy with that.”