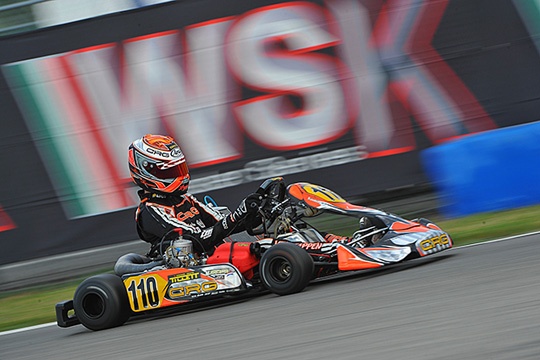 Press Release by: CRG
Max Verstappen racing in Castelletto’s KZ2 (Picture by MikePhoto/Sportinphoto)
Max Verstappen celebrates the title of WSK Master Series in KZ2 with a second place in Final-2 after the third on Saturday's Final-1 that gave him the mathematical certainty of the title. The Spaniard Eliseo Martinez gets the 60 Mini's title. Fuma Horio forced to retirement in the Final of KF.

A double podiumfor CRG and Max Verstappen ended the WSK Master Series 2013 at Pista 7 Laghi in Castelletto di Branduzzo (Pavia, Italy), with the KZ2 title firmly in the young Dutch driver and CRG's hands after the good result scored in the first Final run on Saturday. Thanks to the second place in Sunday's Final, Max Verstappen and CRG obtained another good success in this International series that is to be added to the WSK Euro Series in KZ1 and the KZ European CIK-FIA titles won earlier this year.

VERSTAPPEN'S SUPERIORITY. Max Verstappen's superiority has never been questioned –  despite the Dutch driver being at his first year in the series with the gears – in this successful first half of the season run challenging champions and highly ranked international rivals.

This supremacy was also granted, on a technical level, by the CRG performing chassis and by the TM engine prepared directly by Max's father, former F1 driver Jos Verstappen.

Max Verstappen will not have the time to unwind and celebrate the victory as he will have to start focusing on another upcoming important appointment: the European CIK-FIA round scheduled for next 21 July at the International Circuit of Abruzzo in Ortona, this time in the category KZ where the Dutch driver and CRG are protagonists after the third place obtained in the first round in Alcaniz.

Max Verstappen: “I am really happy on the level of competitiveness shown in this second final on Sunday.Compared to the race on Saturday we made a lot of progress and we were againvery quick. I am happy for the title but from tomorrow on I will have to focus on the next round that will take place this coming weekend: the European KFChampionship. My target is to try and win also this CIK-FIA title.”

ELISEO MARTINEZ CHAMPION IN 60 MINI. CRG colors have been enriched by another prestigious result in Castelletto as the very young Spanish driver Eliseo Martinez won the title in 60 Mini on CRG/Hero-Lke lined up by team Gamoto Racing. As in the case of Verstappen, Martinez also managed to secure the title early in the Pre-Final on Sunday morning thanks to the third place. Unfortunately an incident at the start of the Final prevented the Spanish driver to celebrate the title on the podium but the final result was already safe thanks to the double podium obtained in La Conca, the points obtained in Sarno and the hat-trick in the third round held in Precenicco nel Friuli.

FUMA HORIO RETIRED IN KF. The Japanese driver Fuma Horio, on CRG-Bmb, was present in Castelletto in KF. He produced a good performance that had an unfortunate ending.  After the good result in qualifying that was worth a place in the Superpole and the good heats, in Pre-Final Fuma could not shine due to some contacts while in the Final he was forced to an early retirement due to theengine failure. Overall he put in a good performance though.

Euan Jeffery, team manager CRG: “This has been quite a tough weekend, track conditions were not ideal due to very high temperatures. Nevertheless, we did a good job and managed to bring home the KZ2 title in the WSK Master Series. Another title – the third one in this season – won with Verstappen, who is in a stunning shape. In Castelletto we had the pleasure of winning the 60 Mini championship with Eliseo Martinez of team Gamoto, despite the youngSpaniard suffered a technical problem at the start that caused an incident.Fuma Horio has had bad luck in KF as his engine failed when he recovered all the way up the the ninth place. Now another important round awaits us: in the KF European Championship in Ortona we will be fighting again for the title with Verstappen but we will be hunting for a good result with the other drivers of the team too.”

TV SPECIAL.  A special on the weekend will go on air next Friday 19 July on RAI Sport 2.

All results areavailable at www.wskarting.it