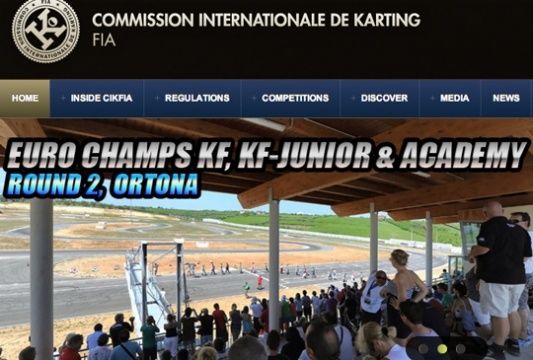 Press Release by: FIA Karting
The two-event 2013 European KF and KF-Junior Championship will be resolved in a few days at the Italian track of Ortona.

The hierarchy at the end of the first European round at Alcaniz is as likely to change as it is to be confirmed in Italy, even though the two titles will go to one of the few drivers who have already scored valuable points. The more "classic" track at this second round may offer great opportunities for revenge to competitors who were unlucky in Spain. At the same time, the Academy Trophy will reach mid-season at a circuit the series last visited in 2011.

Although it is a distance from the busiest venues in karting, the Circuito Internazionale d'Abruzzo is not completely "terra incognita" for the CIK-FIA or for WSK Promotion. In 2011, when the complex at Ortona opened, the Academy Trophy and the U18 World Championship were very open races on the 1600m Italian track. The second of three rounds of the 2013 Academy Trophy should again produce great battles between consistent drivers ​​and daring category newcomers. The Belgian Maxime Potty will do anything to increase his tally of 95 points and consolidate his leadership position in the standings, a plan that the Spaniard Arturo Melgar, 2nd by 11 points, the French Gautier Becq, 3rd by 16 points, the Estonian Ralf Aron, 4th by 18 points or the German Mike Beckhusen, 5th by 22 points, will be trying to foil. It will also be worth followimg the Russian Artem Petrov, very fast at the end of meeting in Genk, and the French Adeline Prudent. Some quick reactions can be expected from the Sri Lankan Shanaka Clay, the Turkish Berkay Besler and the French Nathan Hédouin who are currently further back than their talent deserves.

The Academy Trophy provided an opportunity for some of the drivers in the European KF Championship to race on the Ortona track in 2011. This includes the French Dorian Boccolacci (Energy-TM-Vega) who won Race 2 or the British Benjamin Barnicoat (ART GP-TM-Vega), regularly in the top five. The current championship leader Nicklas Nielsen (Kosmic-Vortex-Vega) has also had the opportunity to take an international victory on this track two years ago. Although the Dane is highly rated in the title race, the battle is not a foregone conclusion in the face of serious contenders like fellow Dane Christian Sorensen (Tony Kart-Vortex-Vega) or the rapid Dutchman Max Verstappen (CRG-TM-Vega) who has just triumphed in the European KZ Championship. The Polish Karol Basz (Tony Kart-Vortex-Vega) and the Italian Felice Tiene (CRG-Parilla-Vega), ranked in the top five, remain an outside choice.

The young British driver Lando Norris (FA Kart-Vortex-LeCont) leads the European KF-Junior Championship after the Alcaniz round and knowing his current form, he will undoubtedly be the man to beat at Ortona. The chasing group, determined to trip the leader, consists of the Belgian Matteo Raspatelli (Tony Kart-Parilla-LeCont), the Dutch Martijn Van Leeuwen (Zanardi-TM-LeCont), the Canadian Parker Thompson (Energy-TM-LeCont) and Russian Robert Shwartzmann (Tony Kart-TM-LeCont). But we can rely on several talented competitors to come compete fiercely for victory, with the Italian track complicating the task of the contenders.

All this makes the weekend of 20th and 21st July 2013 an important time to follow events at the Circuito Internazionale d'Abruzzo or live on the Internet at www.cikfia.tv