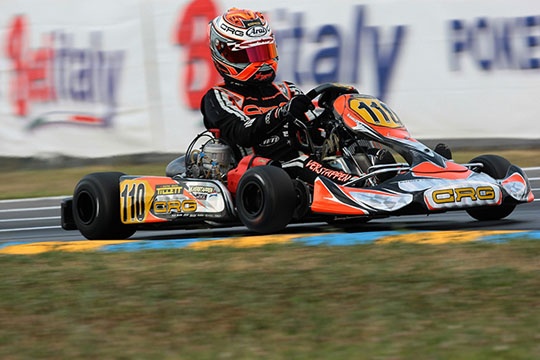 “Well done, Max” is the most meaningful expression to highlight the great work done by  Max Verstappen, the whole CRG works team and by the father of the 15 years old Dutch driver -- former F1 Jos Verstappen -- who takes care of the sportive preparation of the son and provides technical assistance on TM engines; a synergy that broughthome the third title of the year in three championships ended so far.

THIRD WIN FOR CRG AND VERSTAPPEN.  The third mark of the year for CRG and Max Verstappen arrived on a sunny Saturday 13 July in Castelletto di Branduzzo (Pavia, Italy) during the fourth and last round of the WSK Master Series, in category KZ2, where the young Dutch talent paid attention not to overdrive in the first final of the weekend tosecure the title thanks to a third place awarding him the mathematical certainty of the title ahead of the last final of Sunday afternoon.

At the beginning of June in Genk, Belgium, Max Verstappen ended all the discussions on the title of WSK Euro Series in the first KZ1 final on Saturday, showing an evident superiority that was re-emphasized in Genk at the end ofJune in the second round of the European KZ Championship with the victory of the European CIK-FIA title.

All perfect therefore even if nothing is to be taken for granted, especially in karting, but results talk for themselves. The weekend of Castelletto started well for Max Verstappen who set the second time in qualifying, just 127 thousands of a second shy of the poleman. The two qualifying heats kept momentum with a second and a fourth place. The young Dutch driver kept his cool in the Final from lights to flag where after  16 laps and 12 minutes of racing he ended third leaving to Hanley and Leclerc the top two.

Max Verstappen reached 181 points in the standings, which make him uncatchable by all the others, the first of which is still Negro (fifth today) with a gap of 69 points. Too many when only 50 are still to be awarded in the last final on Sunday.

The comment of Max Verstappen: “Obviously I am very happy for the title but today we struggled a bit to find the right setup. We tested several things but we were simply not fast enough to get the win. We will try again tomorrow in the second final. The important thing was anyway to get the title and we have done it! Next week we will have another important appointment in Ortona, were we will be competing in the second round of the European KF Championship. This is gonna be another chance to win, we will see..”

In KF the Japanese Fuma Horio on CRG-Bmb defended CRG's colors in Castelletto with a very good time in the heats getting in the Superpole where he set the 11th fastest time.

In 60 Mini, the very young Spaniard Eliseo Martinez on CRG/Hero-Lke of team Gamoto Racing is in the fight for the Mini 60 title. After the 9th time in practice he was fifth at the end of qualifying heats thanks to a win and two third places.

TV COVERAGE. RAI Sport 2 will broadcast a special on this round on Friday 19 July.

All results of the racing weekend will be available at www.wskarting.it