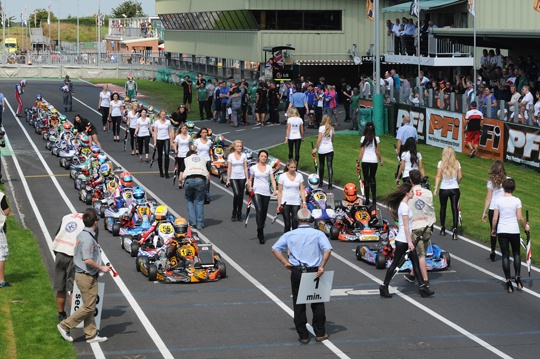 Author: Vroomkart International
Back to the home of motorsport: After 2006 the ROTAX MAX Euro Challenge will finally return to Great Britain. For the halftime race of the season the PF International circuit in Brandon, close to Grantham, will host the third round of the year from 18th to 21st of July.
Photo courtesy of TSR Production

PF International is one of the most modern tracks in Europe. After its opening in 1994 it has been developed constantly. After a major transformation in 2011 the track measures 1.352 metres and incorporates a spectacular bridge with flyover, which is almost unique in karting! So it is no surprise that the European ROTAX elite is crazy about the race at UK’s premier karting facility. Again the categories of MAX Junior, MAX Senior and DD2 promise full grids for the season halftime. But not only the great facilities of PF is attracting the drivers: As the stop on the Island marks the summer race, the organizing RGMMC Establishment will host a hog roast with live music on Friday, which is free of charge to all drivers. Even if the party is a highlight of the UK trip, which everybody is invited to join, priority is given to the racing action. Especially the local heroes aim for the victory on their home ground.

In junior category the UK drivers are in top positions: Connor Hall (Strawberry Racing) is leading the championship, but still waiting for his first season win, which applies to his teammate Guan Yu Zhou from the UK, who follows Hall on second place in the standings. But the duo has to watch out for Lars Lamborelle (DFK). The Dutchman has to confirm that his victory in Italy was not a flash in the pan.

As for the seniors Harry Webb (Strawberry Racing) is the one to be beaten. The reigning junior World and European champion just took his very first senior win in the Euro Challenge at Italy, thus conquering the championship lead for his home match at PF. Yet the youngster will not have a walk-through, since World champion Charlie Eastwood (Strawberry Racing) is close on his heels, lacking only four points in the championship.

In DD2 category the UK is still without a season win. In favourite positions are the previous winners Miika Laiho (MPT Racing) from Finland and Xen De Ruwe (FK Racing Team AB Ltd) from Belgium. The latter is leading the championship and hopes to defend his position during the halftime race: "We have to watch out for PF. I have never been there before but I guess it will be OK for us again." Right the opposite can be said about Sean Babington (Dan Holland Racing). UK's hopes are pinned on the FA driver, who is quite familiar with the track of PF. Not to forget that Babington's first DD2 win is overdue.

All told one expects an exciting half time event with high-level competition at PF. Everybody is invited to join the race action, as live TV coverage will start on Friday and continue throughout the weekend. So stay tuned on the official website www.rotaxmaxeurochallenge.com, where you get all information regarding reports, photos, results and live TV stream.