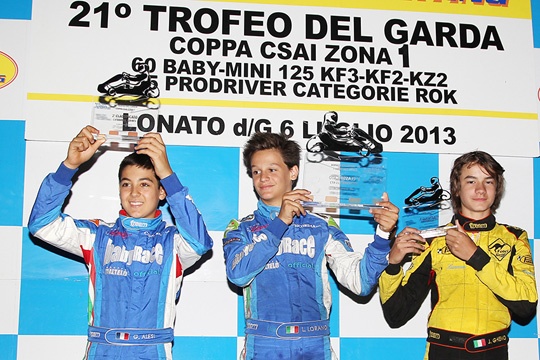 Press Release by: South Garda Karting (Lonato)
In the picture: Final-2 podium of KF3, from the left-hand side Giuliano Alesi, Leonardo Lorandi and Jacopo Gheno (FM Press).
Season record broken in Lonato for a national race with 12 categories on track. Jean Alesi's son gets the maiden podium in KF3 in the final won by the driver from Brescia Leonardo Lorandi, in turn at the first win in this category.

Lonato del Garda (Brescia). A considerable number of 232 drivers have been competing in the 21st edition of the Garda Trophy. The race took place on 6 July on the classic and traditional “night” stage of Lonato in a round valid for the CSAI Zone Cup, Challenge Regional Cup and as the last round of the Rok Cup Trophy North area ahead of the national finalthat will take place next 8 September in Siena and of the World championship that will take place next 19 October on this very same track of Lonato.

The “Nightly” race at the South Garda Karting has been a particularly participated one also in this edition as it set the newseason presence record for a national race and it has been characterized by the usual and irresistible appeal of the night race that this year ended at midnight.

Twelve categories made it to the track, startingfrom the national 60 Baby, 60 Mini, KF3, KF2, KZ2, Prodriver AM and PRO, and all those of the Rok Cup, including Mini, Junior, Rok, Shifter and Super Rok.

KF3. Among the entered drivers also Giuliano Alesi, son of the Ferrari F1 Champion Jean, who started his adventure in karting earlier this year on this same track of Lonato in the Winter Cup. Only 5 months after the debut – and a few races of the WSK and of the Italian Championship on the experience bag – the first podium arrived for the nearly 13 years old of Cologny: a second place obtained in the second Final in KF3 behind the driver from Salò Leonardo Lorandi, who in turn celebrated his maiden victory in this category after dominating the 60 Mini last year. Winning one-two for the team from Brescia Baby Race with Leonardo Lorandi and Giuliano Alesi respectively first and second, both on Tony Kart-Parilla. Third place for Jacopo Gheno (Parolin-Tm). In the first Final the victory went to Marco Ripamonti on Tony Kart-Vortex from Gheno to Mickael Grosso (Tony Kart-Vortex).

KF2. Round success for Baby Race also in KF2, with the Venezuelan Sidney Gomez (Tony Kart-Tm) on the top step of the podium in both Finals. In the first Final Gomez led Armando Iannaccone (GP-Tm) andMarco Cattivelli (Tony Kart-Vortex), while in race-2 he proceeded Alessandro Pandolfi (Intrepid-Tm) eand Iannaccone.

KZ2. 28 drivers were on track in the most powerful category, the KZ2. The victory was obtained by Simone Brenna (TBKart-Modena) in the first Final, while Massimo Dante (Maranello-Tm) secured the victory ahead of the same Brenna and Lorenzo Lapina (Maranello Modena) in the second Final, after an incident took off the race Loris Spinelli (CRG-Tm) and Luca Tilloca (Maranello-Tm) in the initial stages when they were contending the first position.

PRODRIVER AM. The busy Prodriver AM had 30 drivers at the start; in the first Final the victory was secured by Alessandro Zanoni (Praga-Tm), who later on retired in race-2's first lap. In the second final the victory went to Sergio Lattanzi (CRG-Tm) from MarcoCardinaletti (CRG-Tm) to Michele Gregori (Birel-Tm).

60 MINI. 23 drivers were on track in the 60 Mini and Marzio Moretti had the best of all of them proceeding to the flag Nicola Abrusci and Francesco Sabella, all on Tony Kart-Lke. In race-2 the victory was obtained by Danny Carenini (Top Kart-Lke) with Abrusci and Sabella ending again in P2 and P3.

ROK CATEGORIES. As regarding the categories Rok, in Mini Rok the Final was won by Domenico Cicognini (Art GP-Vortex) from Nicola Bizzotto (Top Kart) to Tommaso Sciarra. In the Junior the victory went to Cosimo Durante (Tony Kart) from Danilo Albanese (Kosmic) to Matteo Greco (Tony Kart).