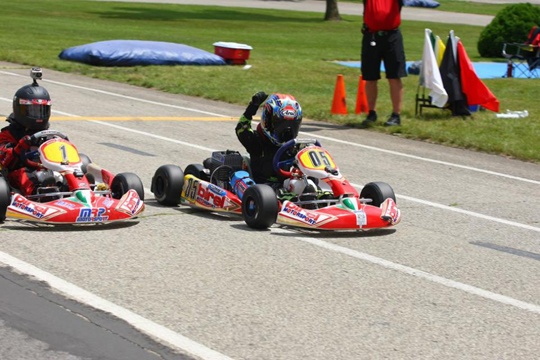 Press Release by: Birel
Birel “Junior” drivers finished off an amazing month of June by scoring 6 wins and 20 podiums during the WKA Manufacturer’s Cup at JET Karting this past weekend.

“We had a very good weekend,” said Tim Lobaugh, Engineer & Team Manager for MRP/Birel America. “Every driver that reached the podium did so against some tough competition. To have a couple of classes where we covered 80-90% of the podium though, was a proud moment for the Birel brand.”

Birel drivers put three drivers in each of the Yamaha Rookie Sportsman classes with Rodgers, Fineis and Andrew Castelucci finished 1st, 3rd and 5th on Saturday and Birel sweeping the top 3 in Sunday’s final with Fineis and Rodgers joined by Aiden Harrington, all driving the Birel C28 chassis.

Another C28 pilot, David Malukas, scored a win and two more podiums. The young driver qualified 9th in Cadet Sportsman on Sunday and drove through the field to take the win, setting the fastest lap of the race in the process. He would place 3rd in Saturday’s Cadet feature and 2nd in Komet Sportsman.

In the junior categories, the Birel RY30-S5 was the chassis of choice, winning 3 of the 4 classes. McAndrews took the win in Komet Jr. Saturday with Quinlan working his way up to 4th from the back of the field. The duo looked to be strong in qualifying for the Yamaha Jr. Saturday class, with Quinlan qualifying 2nd and McAndrews 3rd. In the final however, they placed right behind teammate, Matt Solarczyk, who worked his way from a 9th in qualifying to finish 3rd.

In Sunday’s junior finals, McAndrews would score his second win of the weekend in Komet Jr. followed closely by Quinlan. Solarczyk would place 7th. The Yamaha Junior final would be nearly an ALL-BIREL podium with Quinlan passing 19-karts after starting 20th to win the final with Solarczyk, McAndrews and Becker Reardon finishing in the 3rd, 4th and 5th spots.

Birel drivers, with support from MRP-BirelAmerica and Birel dealers, capped off a remarkable month that showcased several drivers scoring wins.

“It is pretty common in motorsports for a driver to get ‘hot’ and score several wins over the course of the season,” added Lobaugh. “One thing I enjoy about our success so far is that it isn’t limited to a few drivers, but several working together, all with good equipment at their disposal. We love the junior development programs and these great results.”

Not to be out-done by the juniors, the EKN #1-ranked TaG driver in the country, Louie Pagano, used the same RY30-S5 chassis utilized by the junior team to lead the TaG Senior final, setting the fastest lap of the race before being sidelined by a thrown chain.