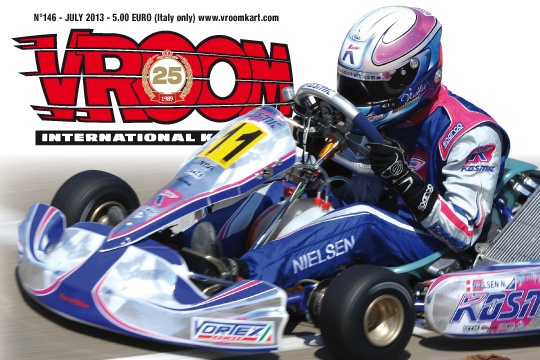 Author: Vroomkart International
First real taste of summer in Alcaniz for the opening round of the European KF-KFJ Championship. With temperatures reaching the 38o C mark, drivers, mechanics and teams had to make an extra effort to beat the competition. And the result was extremely exciting. Few hours before his win, we also had the opportunity to interview KFJ round 1 winner Lando Norris. You can read all this and lot more on Vroom July issue!

Has karting still anything to teach?

The number of Italian entries for the first round of the European KF championship, which was hosted in Alcaniz, Spain, is only the latest debacle of the Italian ASN in facing the current difficult situation at national level.

We are talking about a haggard group of drivers (roughly a dozen) who, moreover, also in terms of results, (if you don’t consider Tiene and Lorandi who do not have anything to do with this because they are professionally at a different level) are not well equipped - out of 34 finalists it is hard to find a standard bearer - to represent the Italian breeding ground.

Over the 90s to 2000 – a period that I gladly talk about – the 100 ICA, for example, gave life to continuous movement and fermentation, allowing lots of private drivers to stand out also in titled events. This was only because those who practiced karting complied with norms that allowed them to enter for any titled event both in Italy and Europe. This solution allowed them to experience competition and match their skill with other rivals bringing out the best in them no matter what there financial background was.

This mechanism helped to draw more and more karting fans to step into this world: the best promotion that this sport could have. The aim of any driver is to reach his goal, his limit, meet the challenge and come through as winner, today, this is very hard to achieve for anyone who practices karting. So, I ask myself, what is the point of organising Cik-Fia events if you don’t give karting enthusiasts a chance to practice this motorsport discipline?

An ingenious intuition by Rotax, which came about in 1997, should be an example: promote an engine and a revolutionary format so that all karting enthusiasts can benefit, with equal opportunity in achieving important goals taking part in a selective race, therefore exciting. The result is that also today they apply this criterion, and this has come through at Castelletto, during the Rotax Euro Challenge round raced for the first time on the Italian circuit, where not even the likes of champions such as Verstappen, Tiene and Lennox have been able to upset the balance.

And the same can be said of the championship promoted by SodiKart, which uses highly-performing rental equipment for an innovative racing format, which is growing more and more because of accessibility, formative value and promotional reasons.

Going back to the situation here in Italy, someone has rightly though it was time to act, luckily offering drivers a chance to go back to the track in a more humane context: less costs and more racing satisfaction. Do you know something? It doesn’t take much to build up interest in karting again. The formula remains the same, for the past and for the future. A kart driver has to be free to interpret the sport in accordance to the world he lives in, finding satisfaction and relaxing in getting the goals he aims for. Impositions over these past ten years though have wiped away these opportunities and the results are evident, it has determined a depression of the base which had been contributing, on a large scale, to the general wellbeing of karting for at least 30 years. I will never tire of saying, that such a paradox must never be repeated. And the Cik-Fia ought to think over some of their promotions, important to give sense to the important events, such as the European and the World Championships, so that merit goes to the representatives of the international breeding ground… This might justify the propaedeutic context of karting as a stepping stone to automobiles.

As for Vroom, in line with editorial strategy taken up these last months, where the aim is to expand and improve the means of information, it pleases me to say that after launching Vroom Spain and Vroom Russia & Ukraine, you can find the Brazilian site online (www.vroomkart.br.com) and the Polish one (www.vroomkart.pl), another two countries have chosen our platform to give information about what is going on in the world of karting in their homeland, as well as Vroom’s special columns and technical articles.

For the time being, all that remains to be said is Happy Reading until the next issue.

The first round of the European KF-KFJ championship is held mid-June at the Spanish circuit Motorland Aragon in Alcaniz. The weather is torrid in the desert areas of the Aragon region; temperature peaks reach 38°C at midday. However the young drivers give life to exciting battles, very close driving giving rise to spectacular racing. British driver, Lando Norris (KFJ) grabs round one win and a surprising Nicklas Nielsen, from Denmark wins in KF: both powered by Vortex

The opening round of the CIK European Championship for KF Junior in Alcaniz, Spain, offered us the opportunity to meet British rising star Lando Norris, by all means one of the most promising young talents from the UK, traditionally one of the most prolific motorsport breeding grounds in the world.

A “Guided” tour at the new Vortex site, to see the latest innovations for KF and gear class KZ engines made at Giovanni Corona’s factory.

In the crazy world of karting, VPDR is what one would normally refer to as a small fish in a big pond. To survive, this primarily Rotax-focused team has dared to be different… after all, it’s not the size of the pond that’s important; the importance is that everyone in the team swims with the same purpose. 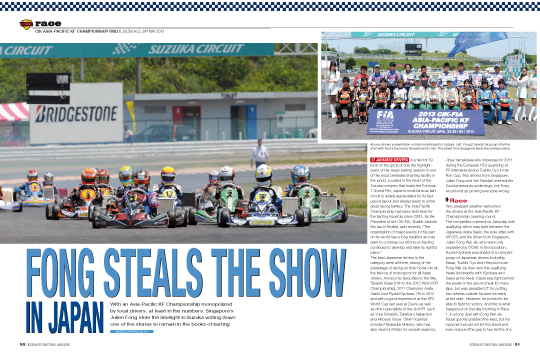 With an Asia-Pacific KF Championship monopolized by local drivers, at least in the numbers, Singapore’s Julien Fong stole the limelight in Suzuka writing down one of the stories set to remain in the books of karting.

The Rotax Euro Challenge has stepped onto Italian soil for the first time at the 7 Laghi Circuit in Castelletto di Branduzzo. More than 170 drivers from all over the world, Italy included, record presence for the second continental round; usually there aren’t as many due to school exams.

The Rotax Max Challenge Asia & Malaysia series returned to the Speedway PLUS circuit for its fourth of 6 rounds. Drivers and teams had a different challenge with the weather, with the typical scorching hot sunshine taking a step aside to haze covered skies. The days kept hot, but not quite as pleasant with a slight stench of smoke in the air.

GARAGE – Freshen up your kart

Here you will find some advice on how o bring back the old shine, especially if you have bought a second hand kart that has been rather “abused”. The aim is to make it look like new, and if the base isn’t too far gone, you will most probably achieve your aim. So, let’s see the different things to see to, that is, if we start with a newly acquired kart with “all” the parts there. 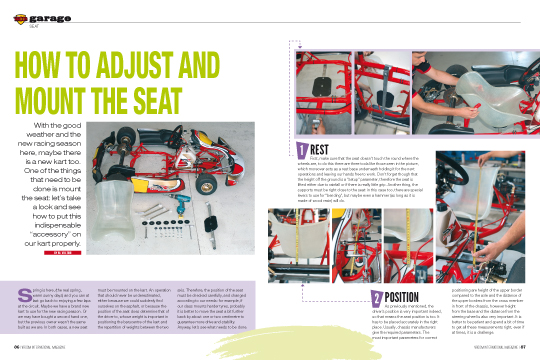 With the good weather and the new racing season here, maybe there is a new kart too. One of the things that need to be done is mount the seat: let’s take a look and see how to put this indispensable “accessory” on our kart properly. 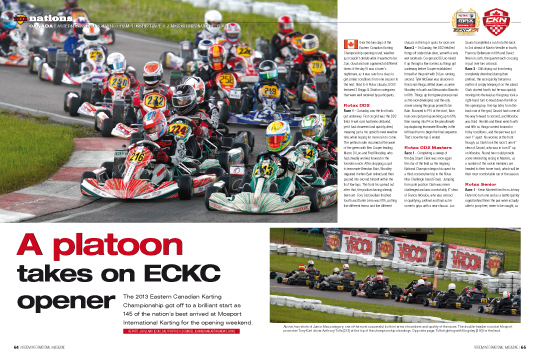 Four major national championships in this issue: the Eastern Canadian Karting Championship opened up at Mosport International, the Rotax CAN-AM Prokart Challenge at Greg Moore Raceway, the Australian CIK Stars of Karting stopped at Geelong, while the Portuguese National Championship travelled to Leiria for its second round. 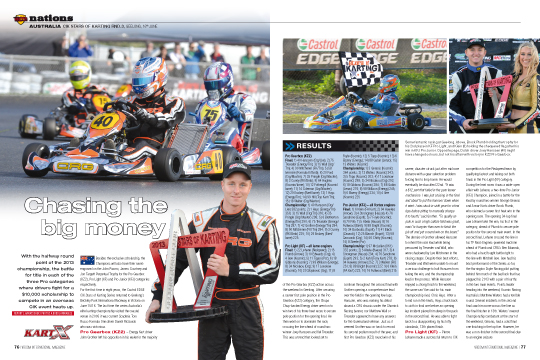 We start our news section with the FIA Sport Conference at Goodwood where the panel discussed also about the future of karting. You will also find a preview of the European KZ-KZ2 Championship final round; a new joint initiative between the French and Chinese federations; the new board of the Australian AKA chaired by Mick Doohan; racing news from Denmark Rok Cup; RGMMC Live TV fantastic success; and Danilo Rossi talking about his new role within the FIA Drivers’ Commission.

In our column dedicated to our younger readers, VroomMama, parents will find some tips on how to answer tricky questions.

We close with the national and international calendars for the month of August, listing 38 national events from 17 countries, as well as 1 major international race.