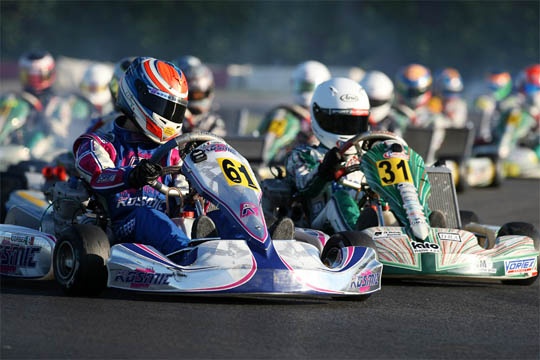 Press Release by: South Garda Karting (Lonato)
In the picture: Luca Corberi (61) in action at South Garda Karting of Lonato.
Subscriptions are open for the important round of the “nightly” race of Lonato where more than 200 drivers are expected to compete in the categories 60 Baby, 60 Mini, KF3, KF2, KZ2, Prodriver and in all ROK categories for the eighth and last round of the North Rok Cup.

Lonato del Garda (Brescia). Subscriptios are open for the 21st Garda Trophy, the classic night race to be held at South Garda Karting of Lonato next Saturday July the 7th.

More than 200 drivers are expected on track in the traditional race of Lonato in the categories 60 Baby, 60 Mini, KF3, KF2, KZ2, Prodriver and all the ROK categories that will compete for the North Rok Cup, the eighth round of theseason which is also the last ahead of the National Final of the Rok Cup Italy scheduled for September.

The important round is among the most important in the national panorama and one with a special appeal as it starts in the afternoon with qualifying to reach its conclusion well in the heart of the night with the Finals. Very rich and particular also the prize ceremony that this year will feature also some novelties that will meet the approval of all drivers that will get on the podium of this edition of the race.

The programme schedules technical scrutineering for Saturday 7 July from 7.30 (local time) to 11.20. The green flag to free practice will be waved at 8.00, while the official sessions will follow at 11.20. From 13.30 drivers will be on track for qualifying and then for eliminatory heats, pre-finals and finals.

All results will be available at www.southgardakarting.it