Author: Vroomkart International
Avenger is the name that Tillotson has given to a new series of carburettors bearing the initials HW. The name Avenger was not just a chance name, instead, it is part of a project to re-launch a racing image, which customers have generally attributed to other manufacturers with younger set ups and less manufacturing experience. The aim is for Tillotson to avenge its reputation and regain its prestige as a leader in the field of high performance carburettors, rather than just  as a manufacture of carburettors for applications other than karting.

Tillotson Racing responsible for all the big competition sector

Avenger is the name that Tillotson has given to a new series of carburettors bearing the initials HW. The name Avenger was not just a chance name, instead, it is part of a project to re-launch a racing image, which customers have generally attributed to other manufacturers with younger set ups and less manufacturing experience. The aim is for Tillotson to avenge its reputation and regain its prestige as a leader in the field of high performance carburettors, rather than just  as a manufacture of carburettors for applications other than karting.

With the aforementioned objective in mind, Tillotson has set up a new department to focus on racing. Tillotson Racing has all the material required for this challenge - from budget to technology, engineering to production line. The opportunity to introduce the new image came with  the new carburettor and engine homologation period, 2007-2015, and they have done so by presenting a wonderful triad that satisfies the new KF classes.

Factory
Tillotson has operations in the United States, Brazil and China. However, Tillotson Racing is a core group of 25 skilled engineering, sales and production personnel situated in Tralee, Ireland. The firm holds ISO 2001:2000 certification for quality control that is currently reflected in product performance. Tillotson has invested more than one million Euros during the last three years on the Tillotson Avenger HW alone.

A bit of history
Today, Tillotson is an Irish set up in every effect, but its origins lie far from Ireland in time and space. It was founded by Toledo, in the Ohio, USA, in 1914 by Harry Tillotson and John Willys. Not long after Wylis left the business to start another business, Willis Overland, an automobile factory that makes what we all call “Jeeps”, while Tillotson continued to make float-type carburettors for the automobile industry, which is in continuous expansion. In the meanwhile, back then, the car industry picked up and started a sort of vertical integration that made Tillotson explore other fields, such as the small 2 and 4-stroke engines.
In the 40s, the coming of diaphragm carburettors was an incentive for average-small engine manufacturers to work in all directions, as for chain saws. Tillotson soon became a leading manufacturer independently from this type of carburettor.
In the 60s, financial operations brought Borg Waner Corporation to take over Tillotson and setting up the Marvel-Schebler-Tillotson Division and for the next 20 years it made carburettors on three different sites, in Illinois, Arkansas and also in Tralee, Ireland, which is the present site that in 1972 was only used for assembly passing soon after, also to investment in updated machinery to the complete process, which included designing, research and development.
In 1985, the carburettor department, well consolidated in Ireland, was sold giving way to present business for diaphragm carburettors.

Production Process
Tillotson’s core of skill and technology is found in its precision machining and highly skilled assembly workers, which guarantee exacting tolerances. Machined components are appropriately bored, milled, tapped and reamed, undergoing particular finishing procedures such as trimming and thermal dedurring.
Modern machines and computerised work centre guarantee 1/100 mm accuracy, but in cases where tolerances are even lower than zero, such as for fuel flow, nominal diameter remains the actual diameter. Carburettors move through a conveyor system where workers assemble more than 40 components into the finished carburettor. The carburettor pump function and settings are continuously controlled during assembly. A variety of airflow tests that simulates engine working are carried out on each model before it is packed and delivered.

Engineering
Engineering has always been the key element in the long history of Tillotson innovation and evolution.
A few years ago, some people thought that 2-stroke engines would die out due to strict regulations on pollution. However, today, especially in karting, these engines are still going very strong. Two-stroke engines are smaller and more powerful than other engines with same displacement, and because these engines don’t require any timing elements, they are cheaper to produce and operate. These reawsons were enough for the Cik to decide to continue using the two-stroke engines with the new KF engines. Tillotson Racing has embraced this design with its new HW line that has required specific instruments, machines and investments.

New HW
There are three models of the Tillotson Avenger - the HW10A for KF3, HW11A for the KF2 and HW 12A for KF1. While the HW10A and HW11A have similar bodies and machining characteristics; the HW 12A is completely different. The Avenger HW10A is the first model for the new range, and is destined for ex-ICA Junior class, which is picking up very well. The Venturi is 20 mm, according to regulations, while the diameter of the part that holds the throttle is 26 mm. The Avenger HW11A is a 24mm model, but valve diameter (remember it isn’t situated near the minimum diameter, but before, where the diameter is a bit bigger) is 28 mm. For the queen class, we have the Avenger HW12A with a 30 mm venturi and a 34 mm valve. 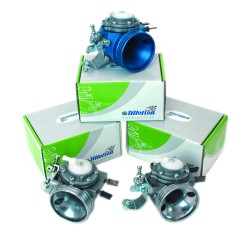 here is an interesting optional available for any model - a very fine stainless steel valve and shaft designed in 2 halves to allow for more airflow. It takes some skill to assemble. The most unique characteristic of the HW11A and the HW12A is a patented AFC (Acceleration Fuel Circuit) with internal ducts and nozzles that enable fuel to flow around the body of the carburettor so that it can be injected into the throttle from both ends, top and bottom. This, double injection allows for better air/fuel mixture atomisation, improved and more homogeneous mixture and, in the end, improved accelerations. It works independently from low and high adjustment needles. It works automatically, but an independent lever also allows you to control the circuit manually.

The carburettor also helps fuel metering, eliminating “zone” problems with a new inlet needle and seat. These new features get rid of delays caused when the engine passes from low revs to high and when the mixture leans, both of which can otherwise result in low acceleration. This helps when there is there is pressure that varies continuously and also reduces any delays in response. The Tillotson Racing engineers have also researched for full throttle opening, using test benches and improved air flow with a new venturi profile and valve shaft position, in order to get best performance.
For the Tillotson Avenger HW10A and HW11A models, central body has been made through high-pressure die-casting with single cavity to ensure dimensional accuracy and stability. Tillotson Racing guarantee that this sort of casting eliminates any porosity and makes the material used similar to that obtained through gravity fusion of forging. The material is lighter as well, so, you save on weight but still have enough material to make your own modifications.

The Avenger HW12A is machined from a solid block of aluminium and anodised to enhance strength and appearance. The aim is to have a carburettor ready for high level racing, making the most of all the experience of leading manufacturers. The part, obtained through fusion is then machined on the latest machining centres supported by PC to integrate project and development. Special attention has been paid to choice of diameter for internal gasoline and air ducts.
All three models have a new design for body and Venturi duct, needle and seat, idle and acceleration nozzle. Fuel ducts of carburettors destined to KF2 and KF1 have been redesigned. The gas valve is removable from the shaft. Mechanical machining has been carried out on sophisticated CNC machinery that guarantees accuracy.
Furthermore, for the HW series, Tillotson Racing carries out continuous calibration control during assembly. Besides the usual flow test with liquid when it has been completely assembled, airflow tests are carried out at various phases of production so that the right calibration and required basics are controlled throughout. In other words, if at any time during manufacturing, they should see that the diameter is not right, the part is removed from the line before becoming a faulty carburettor. There is a master carburettor, adjusted according to a sophisticated test bench. All tolerance, air and fuel flow must be conform to this master model.

Double duct
The Ireland factory doesn’t forget about problems concerning two-stroke engines and environmental pollution either. That’s why their engineers have been studying a special feed system for the latest generation of two-stroke engines - the ones with stratified load that are able to satisfy present day requirements and future norms. Instead of a complicated electronic direct injection (which has given very good results applied to Aprilia DiTech engines), Tillotson uses a new feed system comprised of a diaphragm carburettor with either another throttle valve duct added to it or with existing throttle valve split in two. This must control one or more ducts through which only air passes with the aim of carrying out a scavange phase without wasting petrol at exhaust (because there isn’t any) and to form a separating barrier for burnt gasses that are about to exit and fresh load (with petrol) that is about to enter along the traditional carburettor duct.
It is a simple system compared to electronic direct injection systems, which are more complicated and more expensive too, but also, very efficient (i.e. Aprilia DiTech’s high yield).
This process is known as double load or head load technology.
The valve of the secondary duct (the added one) is interconnected with the main one and everything is controlled with the required phase for load entry.
Obviously, the engines must be updated, but remain simple and reliable.
According to Tillotson experts, even the average kart driver won’t have any difficulty with the new system. The next generation could bring carburettors with electronic control or even more economic and practical electronic injection that today are too expensive and difficult to maintain and adjust.