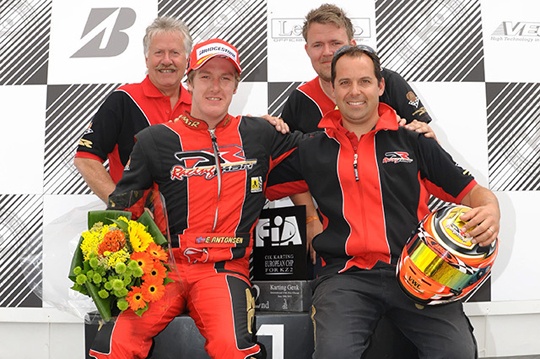 Press Release by: DR Racing Kart
Though Riccardo Negro was the favourite for the title before the second and last round of the European KZ2 Championship, the Italian driver ran out of luck on the Belgian circuit of Genk.

The Norwegian driver Emil Antonsen, instead, made the most of his opportunity and conquered the European title with great determination. This is the second international success of the 2013 season for the DR Racing team, which has now confirmed its leadership position in KZ2.

DR Racing had already been impressive in 2012 when its two drivers climbed onto the World Cup podium at Sarno. This year, Danilo Rossi's team has taken another step forward by winning two major European titles. Last month, Riccardo Negro won in the WSK Euro Series and Emil Antonsen has just been crowned European CIK-FIA Champion on the same circuit of Genk.

Despite his convincing performances, Negro was not able to fight for the title because a mechanical problem forced him to withdraw during the pre-final; as a consequence, under the 2013 regulations, he could not access the final. Luckily Antonsen was more successful. He won three qualifying heats, conquered the lead of the intermediate classification and took third place in addition to setting the second fastest time in the pre-final. Thanks to his skills as a strategist, he reached his goal in the final race. After his 4th place at Wackersdorf, a second place ahead of Johansson was enough to enable him to win the title. DR Racing made it again to the top positions: mission accomplished!